Obama Is In Town, Ruining Your Commute

President Obama, the Linsider, is raising money for his re-election campaign—'cause SuperPACs only do so much— in the Big Apple tonight. And, boy, is he pissing off some people: 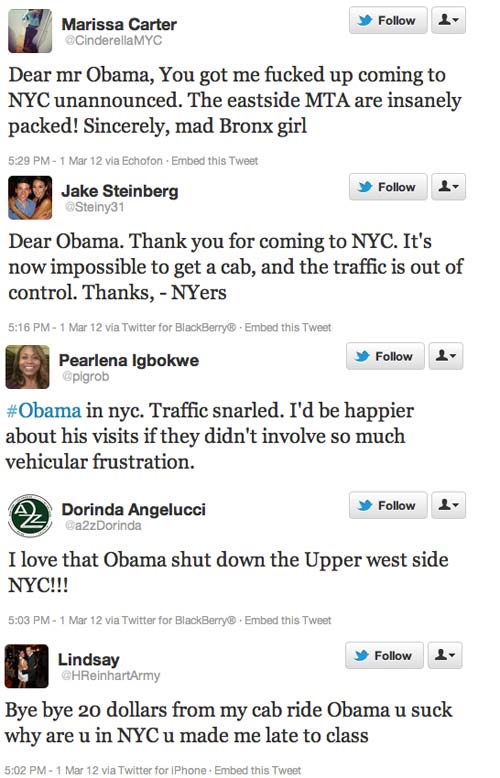 He's just left a fundraiser on the Upper West Side—West 67th Street to be specific—and there are some others: According to the Daily News, "The big-ticket event is a $35,000-a-plate dinner at ABC Kitchen, an E. 18th St. organic restaurant run by celebrity chef Jean-Georges Vongerichten. After that, Obama will move around the corner to ABC Carpet & Home for a gala hosted by 'Parks and Recreation' star Aziz Ansari and featuring music by The Roots and Ben Folds." Deepak Chopra is one of the organizers of the ABC Carpet & Home event. Chopra spoke to the NY Times: "Mr. Chopra said he was proud to help the president, who has 'displayed complete loyalty to reasoned policies' and needs another term. 'Through 30 years of reactionary conditioning, we’ve allowed basic values to deteriorate,' Mr. Chopra wrote in an e-mail."

Get updates on traffic by checking out Gridlock Sam's Twitter.

#commute
#election 2012
#fundraiser
#fundraising
#president obama
Do you know the scoop? Comment below or Send us a Tip