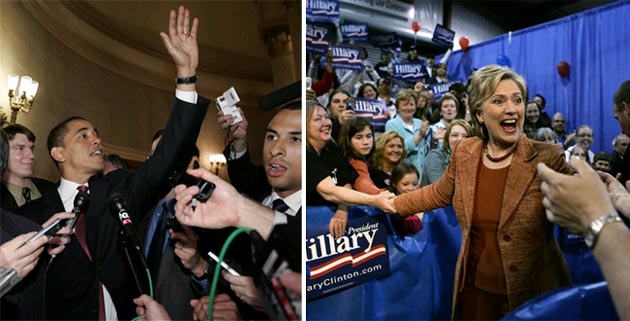 Photograph of Barack Obama on the Hill by Susan Walsh/AP; photograph of Hillary Clinton in Oregon by Elise Amendola/AP

Barack Obama's and Hillary Clinton's campaigns continued their push for the Democratic nomination, but only one seemed energized. Obama made an unexpected appearance at the House Congressional chambers, causing "Obamamania [to descend] onto the floor of the House in full force."

Representative Yvette Clarke, who represents Brooklyn, had him sign the Daily News cover with him on it, and Republican Representative Illeana Ros-Lehthinen told Politco that the group of elementary school children she was escorting screamed, "It's Barack Obama!" Ros-Lehthinen said, “The kids were very excited. Like rock star excited.”

Clinton has been campaigning in West Virginia, Oregon and South Dakota, as the NY Times reports the campaign has had to cut spending, "likelihood that Mrs. Clinton will lend her campaign more of her own money beyond the $11 million she has already provided." And she's facing criticism for her words in a USA Today interview, where she said, "Sen. Obama's support among working, hardworking Americans, white Americans, is weakening again." While Clinton used exit polls as her reason for her statement, Representative Charles Rangel of NY said, "I can't believe Sen. Clinton would say anything that dumb."

And the Reverend Al Sharpton--not a superdelegate but certainly a noisy supporter or detractor--told NY1's Inside City Hall that Clinton needs to exit the race, "The audience is gone, the lights are down, you're getting ready to cut the mics off and you are still on the stage singing. It's over, it's all right, it's over. Come sing another day, but this show is over Senator Clinton."

#barack obama
#election 2008
#hillary clinton
#politics
Do you know the scoop? Comment below or Send us a Tip