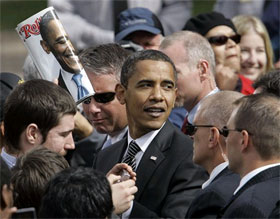 Tonight, Barack Obama will get 30 minutes of prime time on CBS, NBC, Fox , Univision, MSNBC, BET and TV One to deliver his campaign message. It's a rare, but not unprecedented, move (Ross Perot bought 30-minute informercials during the 1992 presidential campaign). The campaign's chief strategist David Axelrod explained why they went with a 30-minute option, "The airways are glutted with 30-second ads and it's hard to break through."

The NY Times saw a one-minute preview of the infomercial: "The trailer is heavy in strings, flags, presidential imagery and some Americana," and Obama is seen at a kitchen table with white, "apparently working-class voters" in one part and is in front of a "stately desk and an American flag" in another. There will also be a live segment from Florida.

Politico wonders if the infomercial is "smart or overkill"? One Republican strategist said, “It’s like football. People may complain that a team is running up the score, but that team is still the one that wins," while another pundit said, “Campaigns tend not to worry about overkill. Campaigns, by definition, are overkill.” NY Magazine had some amusing suggestions from notable people for what should be in the informercial--Chuck Klosterman said, "Reunite the Smiths."

CNN, which is not airing the infomercial, will have John McCain on Larry King Live. And CNN personality, Campbell Brown, is upset that Obama broke his promise to use public financing, opting inside to tap into his donations which now total over $600 million. And why no ABC? ABC initially offered to air the infomercial on another night, in order to keep its Wednesday night shows (Pushing Daisies! Private Practice!) on air. By the time the network changed its mind and offered its 8 p.m. slot--only to find itself out, since the Obama campaign had finalized its ad buy.

Update: The informercial is after the jump. The McCain campaign's response: "As anyone who has bought anything from an infomercial knows, the sales-job is always better than the product. Buyer beware."

The NY Times' Jim Rutenberg described, "the infomercial was part slickly produced reality program; part Lifetime biography; and part wonkish policy lecture with music that could have come from 'The West Wing,'" and analyzed that it risked being "manipulative" but "it was largely in keeping with Mr. Obama’s strategic imperative this year: Make voters comfortable with the idea of him in the Oval Office while at the same time presenting him as a candidate who can connect with everyday, middle-class voters struggling through the toughest economic times in generations."