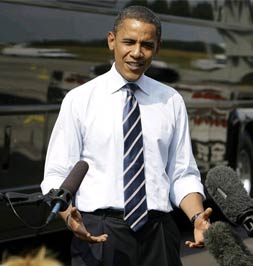 Today, Barack Obama has been campaigning in York, Pennsylvania. When asked whether, as Republicans charge, the Democrats or media has been sexist with its treatment of Republican vice presidential candidate Sarah Palin, Obama said (video below):

Listen, if they want to work the refs, they are free to do so. I think the public can make their judgments about this. The notion that any questions about her work in Alaska is somehow not relevant to her potentially being vice president of the United States doesn't make too much sense to me. I think she has got a compelling story, but I assume that she wants to be treated the same way that guys want to be treated, which means their records are under scrutiny. I have been through this for 19 months. She has been through it, what, four days so far.

And he said of her speech, "John McCain is running for president. I am running against John McCain. As far as I can tell I don't get a sense that Gov. Palin has ideas that are different from John McCain. And that speech she delivered was on behalf of John McCain." He added that he's used to the GOP's attacks, "I've been called worse on the basketball court."

ABC News (and the AP) takes apart Palin's speech to offer more information about her claims (her "vetoing wasteful spending" is related to hiring a lobbyist to bring her hometown of Wasilia "around $27 million in federal money, about as much as Boise, Idaho. Boise has a population of 200,000 people, compared to Wasilla's 10,000.") ANd Politico's Roger Simon faux-apologizes on behalf of the media, "On behalf of the elite media, I would like to say we are very sorry...We have asked pathetic questions like: Who is Sarah Palin? What is her record? Where does she stand on the issues? And is she is qualified to be a heartbeat away from the presidency?"

Tonight, Fox News will air Bill O'Reilly's interview with Obama. That airs at 8 p.m., two hours ahead of when McCain will accept the Republican nomination.