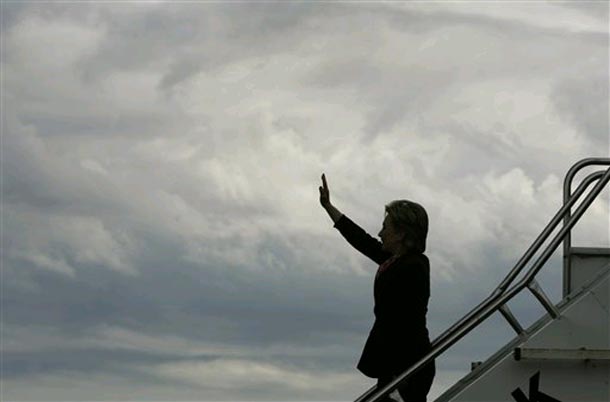 Photograph at top of Hillary Clinton making her way from her campaign plane yesterday by Elise Amendola/AP; photograph below of Barack and Michelle Obama arriving in St. Paul by Chris Carlson/AP 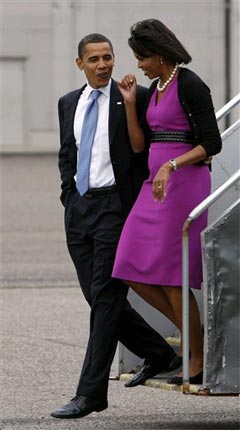 The day, though, was more notable for the many, conflicting messages coming from Senator Hillary Clinton's campaign. Earlier this morning, Clinton campaign chairman Terry McAuliffe indicated that when Obama received most of the delegates, "I think Hillary Clinton will congratulate him and call him the nominee." Which many took be a sign she was would concede tonight, and the AP also issued a report Clinton would concede. The Clinton campaign denied the report, saying it was "inaccurate and wrong" or "100%" incorrect.

Then a few hours later, on a call with the New York congressional delegation, Clinton said she would be open to being Obama's vice-presidential running mate. She did say she would not drop out of the race tonight, but an NBC News source described Clinton feels "she has earned the right to reflect on what is the best way forward. She wants time to catch her breath and wants time to determine the best way forward."

9:30 p.m. - Clinton, along with Bill and Chelsea, emerges. She congratulates Obama and his campaign for their hard work and asks her supporters to acknowledge how the Obama's campaign has injected vibrance into the Democratic party. Emphasizes how she led the popular vote. (Crowd heers for Hillary, boos at the world.)

She lists all her successes, credentials. Clinton wants to end the war in Iraq and wants the almost 18 million Americans who voted for her to be respected. She wants universal health care, job creation, etc. Crowd chants, "Denver! Denver! Denver!"

Clinton says, "This has been a long campaign and I will be making no decisions tonight." The crowd goes wild. She urges her supporters to visit her website and says she'll be looking at their suggestions as she consults with others over the the week.

Update 10:30 p.m.: Obama greeted the crowd in St. Paul, "You chose to listen not to your doubts or your fears, but to your greatest hopes and highest aspirations. Tonight, we mark the end of one historic journey with the beginning of another — a journey that will bring a new and better day to America. Because of you, tonight, I can stand before you and say that I will be the Democratic nominee for president of the United States.”

You can read his whole speech here; he praises Clinton and counters McCain's various statements.

And Obama won the Montana primary.

#barack obama
#election 2008
#hillary clinton
#john mccain
#primary
Do you know the scoop? Comment below or Send us a Tip