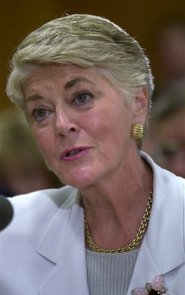 An interview that former vice-presidential candidate Geraldine Ferraro made to a small California newspaper is causing a stir in the Barack Obama campaign. Ferraro, a supporter of Hillary Clinton, told a Daily Breeze reporter, "If Obama was a white man, he would not be in this position. And if he was a woman (of any color) he would not be in this position. He happens to be very lucky to be who he is. And the country is caught up in the concept."

Obama's campaign manager David Axelrod told reporters Clinton should denounce the remarks and remove Ferraro from the campaign's finance committee, "The bottom line is this: When you wink and nod at offensive statements, you're really sending a signal to your supporters that anything goes."

Ferraro, also discussed the "sexist media," "I think what America feels about a woman becoming president takes a very secondary place to Obama's campaign - to a kind of campaign that it would be hard for anyone to run against."

The first-ever female VP candidate formerly worked in the Queens DA's office and represented Queens in Congress and is currently a lawyer in a consulting group. In the recent past, she's been mentioned during the Democratic mayoral race in 2005, when she supported Fernando Ferrar and his rival's campaign strategist said, "I had to spend a few minutes remembering who [Ferraro] was."

And speaking of VP candidates, Obama thinks the talk of him being Clinton's VP is stupid.

UPDATE: Ferraro gave another statement to The Daily Breeze:

"Any time anybody does anything that in any way pulls this campaign down and says let's address reality and the problems we're facing in this world, you're accused of being racist, so you have to shut up," Ferraro said. "Racism works in two different directions. I really think they're attacking me because I'm white. How's that?"

She also appeared on Fox News, explaining she was offended that people thought she was racist (she's fought for civil rights for 40 years) and if she weren't a woman, she would never have been a VP candidate in 1984: "What I find offensive is everytime somebody says something about the campaign, you're accused of being racist."

Clinton, who hasn't removed Ferraro from her finance committee, has said, "It is regrettable that any of our supporters on both sides, because we've both had that experience, say things that kind of veer off into the personal. We ought to keep this on the issues."

#barack obama
#election 2008
#geraldine ferraro
#hillary clinton
Do you know the scoop? Comment below or Send us a Tip