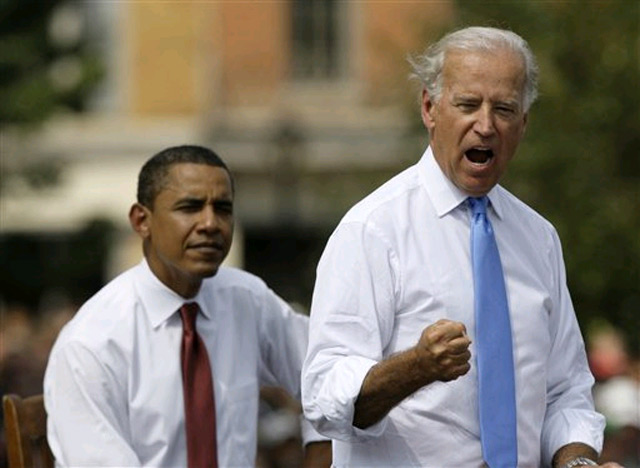 Photograph of Biden speaking while Obama listen at the rally in Springfield, IL by M. Spencer Green/AP

Yesterday, the 2008 Democratic ticket appeared together for the first time in Springfield, Illinois. When Barack Obama introduced Joe Biden, he emphasized the Senator from Delware's roots, “He is still that scrappy kid from Scranton who beat the odds — the dedicated family man and committed Catholic who knows every conductor on that Amtrak train to Wilmington.” And when Biden made it to the stage, Bruce Springsteen's The Rising played.

While the Obama campaign portrayed the choice of Biden as running mate as a "very personal decision" and that Obama "approached it in a very serious, sober and reasoned way," but the Washington Post suggests Biden "fits the reality, if not the starry-eyed message" of the Obama campaign. The Politico lists five things the "Biden pick says about Obama" and the AP notes ways "Biden's career provides grist for McCain's mill."

Though John McCain called Biden to congratulate him, his campaign came out with another new ad attacking Obama--this time using Hillary Clinton's words on the campaign trail--perhaps to appeal to the upset Clinton supporters.

However, yesterday Senator Clinton did issue a statement about the selection of Biden, "In naming my colleague and friend Senator Joe Biden to be the vice presidential nominee, Senator Obama has continued in the best traditions for the vice presidency by selecting an exceptionally strong, experienced leader and devoted public servant. Senator Biden will be a purposeful and dynamic vice president who will help Senator Obama both win the presidency and govern this great country." As it happens, NY Times columnist Frank Rich's prescription for Obama is "the strategy that vanquished Hillary Clinton must be rebooted to take out John McCain."

And add this to the McCain VP rumor mill: There's talk of...Colin Powell.

#2008 Election
#barack obama
#colin powell
#election 2008
#hillary clinton
#joe biden
#john mccain
Do you know the scoop? Comment below or Send us a Tip
A new Gothamist is coming! We’ve moved comments over to our beta site. Click here to join the conversation and get a preview of our new website.