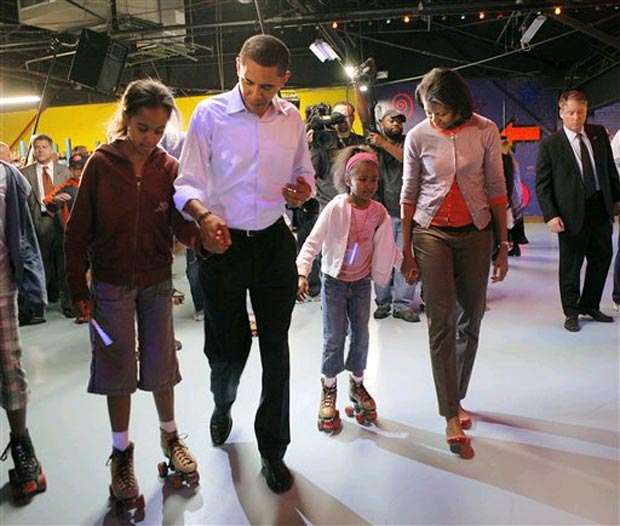 Photograph, above, of Barack Obama with his wife and daughter at the Great Skates Fun Center in Lafayette, Indiana by Jae C. Hong/AP; photograph, below, of Hillary and Bill Clinton in Indianapolis by Elise Amendola/AP

Barack Obama narrowly won yesterday's Guam caucuses, with a Guam election official saying the margin of victory was just 2 votes. Which means he and Hillary Clinton each picked up 2 delegates, ahead of Tuesday's Indiana and North Carolina primaries.

The differences between the two candidates' economic stances has come to the forefront, as deepening economic woes take hold. The NY Times looks at their economic platforms, noting how Clinton "tends to favor narrowly focused programs, like the gas-tax holiday, that speak to specific voter concerns" while Obama "leans toward broader programs meant to help nearly all middle- and low-income families." 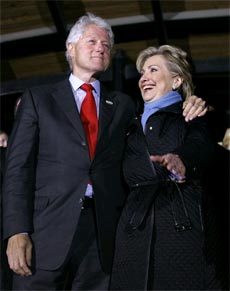 The two candidates' disagreement over gas tax plan (Obama says a gas-tax holiday is Clinton's "calculated" move to "win elections instead of actually solving problems") has become the topic du jour, with Clinton fielding questions about it from George Stephanopoulos on a live, studio-audience edition of This Week. Clinton said oil companies are manipulating the market and making record profits, and says a gas tax suspension would save people money:

STEPHANOPOULOS: Economists say that's not going to happen. They say this is going to go straight into the profits of the oil companies. They're not going to actually lower their prices. And the two top leaders in the House are against it. Nearly every editorial board and economist in the country has come out against it. Even a supporter of yours, Paul Krugman of the New York Times, calls it pointless and disappointing.

Can you name one economist, a credible economist who supports the suspension?

CLINTON: Well, you know, George, I think we've been for the last seven years seeing a tremendous amount of government power and elite opinion basically behind policies that haven't worked well for the middle class and hard-working Americans. ...Well, I'll tell you what, I'm not going to put my lot in with economists, because I know if we get it right, if we actually did it right, if we had a president who used all the tools of the presidency, we would design it in such a way that it would be implemented effectively.

Interesting side note: When discussing NAFTA, Clinton brought up Stephanopoulos's days working for her husband, "George and I actually were against NAFTA...I'm talking about him in his previous life, before he was an objective journalist."