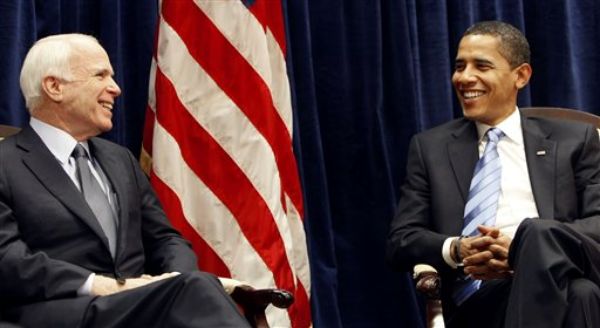 President-elect Obama met with former foe John McCain at his transition offices in Chicago today to discuss issues that have the potential to unite them once Obama takes office. Aides of the two said they discussed climate change, ethics reform and national service. Obama may have also been looking for assistance with McCain's sway among Republicans who are likely to be resistant to the economic stimulus package the president-elect would like to see passed ASAP.

The meeting is being called an unusually early show of unity following an election. The Times points out that President Clinton and former President Bush (XLI) met on the same date in 1992, but obviously under different circumstances with one being an outgoing incumbent. Today's effort was put together by two allies of the former candidates, Republican Senator Lindsey Graham and the newly named Chief of Staff to-be Rahm Emmanuel, who were also both at the meeting.

Obama and McCain took time for a photo op and spoke briefly with the press afterward. But Obama was clearly not looking to dive into any policy discussion, swatting away a question about an auto industry bailout and instead talking about the legitimacy of McCain's Arizona Cardinals saying, "(Quarterback Kurt) Warner's turned out to be unreal."

#bipartisanship
#john mccain
#kurt warner
#lindsey graham
#president-elect obama
#rahm emmanuel
Do you know the scoop? Comment below or Send us a Tip