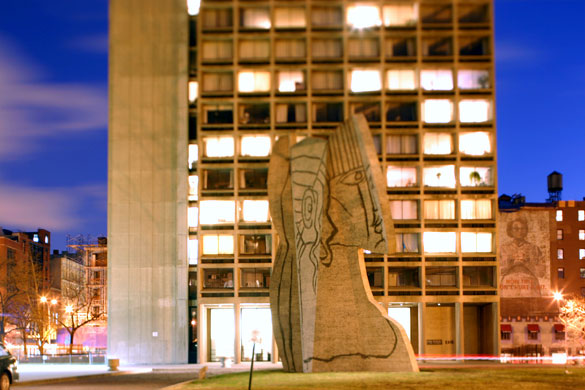 Later today, the city will discuss whether the I.M. Pei-designed Silver Towers should be landmarked. The Observer reported that NYU announced its support today, a reversal from an earlier position over three years ago.

The Greenwich Village Society for Historic Preservation pushed for landmarking the complex, located between Bleecker and Houston Streets and LaGuardia Place and Mercer Street, a few years ago, calling it "an innovative modern design by I.M. Pei." The GVSHP's support may have been to thwart further NYU expansion, as one 2004 rally for the Silver Towers' landmarking also included a protest for NYU's plans to building a "large new Science Center in the midst of the complex."

GVSHP still wants to designate the whole superblock (including the Morton Williams building); GVSHP's Andrew Berman said this superblock's design was "sensitive." However, Manhattan Institute fellow Julia Vitullo-Martin told amNew York, "Silver Towers destroyed the Manhattan street grid and did so deliberately. We probably should be rethinking landmarking if the city is going to landmark these kinds of developments. If you stood in front of Silver Towers and asked people walking by if it should be in the same category of Grand Central Station, I am sure they would say no."

NYU says it could still theoretically build more buildings in the open areas, even if the Silver Towers were landmarked.

The Landmarks Preservation Commission will discuss the Silver Towers around 1:45PM at the Municipal Building (1 Centre Street), 9th Floor. See the other things being discussed on the agenda (PDF). And back in 2004, City Councilman Alan Gerson told the Villager, "Where else do you have a combination of I.M. Pei and Pablo Picasso? It’s an exemplar of modern, high-rise urban building and planning, defining an era of architecture. It’s cries out for it. It’s a no-brainer." The Picasso in question is an interpretation of Picasso's Bust of Sylvette by Carl Nesjär. And here are some more pictures of Silver Towers.