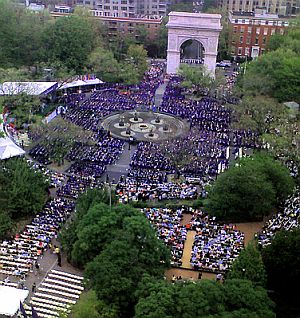 The total annual cost (including room and board) of NYU has gone up 65% in the past decade and next year it will reach an all-time high of $50,182 – a 5.9% increase from last year. The Washington Square News notes that the university is cash poor, drawing 60 percent of its resources from tuition. In an attempt to soften the blow, NYU plans to increase need-based aid to "more than $150 million" total.

This makes NYU the fourth most expensive in the United States, which is fitting because last month it dropped from #1 “dream school” to a lowly fourth place. The school's president, John Sexton, says the increase is happening because NYU just isn’t as well endowed as other schools. And according to the College Board, the NYU tuition spike is still less than the 7% average increase for private, four-year schools in New York state last year. It’s also below the national average increase of 6.3%.

Still, students like Zoe Baugardner are “really, really pissed about having to throw that on my parents.” And freshman Steven Matura tells the Washington Square News that he’d “like to see where the money is actually going because my roof in my incredibly expensive housing caved in twice over the course of this year.” (Watch video of more stunned reactions here.)

Photo of NYU commencement by j_bary.

#city
#cost
#greenwich village
#new york
#NYU
#rising
#school
#students
#tuition
#university
#up
Do you know the scoop? Comment below or Send us a Tip
A new Gothamist is coming! We’ve moved comments over to our beta site. Click here to join the conversation and get a preview of our new website.