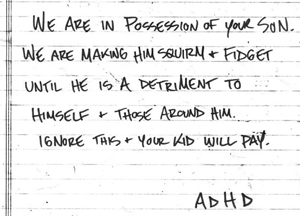 Critics strongly objected to the style of the campaign, however, which took the form of realistic looking ransom notes addressed to parents that stressed kids with these conditions would be doomed to a life of total dysfunction if treatment was not sought immediately. The copy of the Asperger's Syndrome ad reads as follows: "We have your son. We are destroying his ability for social interaction and driving him into a life of complete isolation. It's up to you now. Asperger's Syndrome." A Google discussion group has a message from the Alliance for Human Resource Protection containing all of the campaign's text.

The Daily News has a photo gallery showing a variety of the poster-sized ads stuck around the subway system. A mother with a ten-year-old daughter with autism found the ads offensive, saying that it appeared to insinuate a criminal element to the conditions. An introductory press release [pdf file] from the Child Study Center attempts to explain the goal of the campaign, which is to raise awareness of childhood mental illness and urge treatment as early as possible. The campaign was created for free by the BBDO advertising agency. The Child Study Center recently released a statement of apology and announced the cessation of the Ransom Notes campaign.