NYU is Not Suggesting CUNY to Students 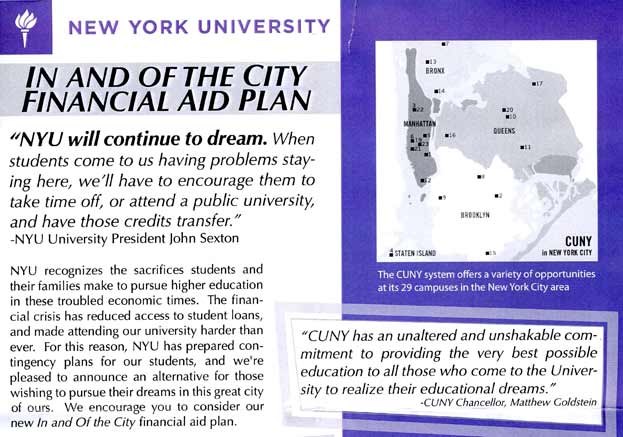 A reader sent us a scan of a flier she found at NYU's student center, "It’s a flier for a NYU financial aid plan that basically tells students that can’t afford NYU to go to CUNY," and points out it's crazy that "NYU can’t give its students decent financial aid even though John Sexton flies to Abu Dhabi every other week and we keep buying new buildings all over the city." The school's tuition is around $50,000.

We're getting confirmation from NYU about the flier (full version after the jump), which almost seems like it could be fake, but it seems legit to our reader, who added, "'In and Of the City'" is something NYU's administration talks about a lot to new students – it's a selling point they use for people coming from the suburbs who are really enchanted with 'NYU the dream school.' NYU has really terrible financial aid, and I guess they're just kinda giving up on getting people to stay. I mean, we're like dead last among private universities for financial aid, but they just keep building new buildings. Sexton does say a lot of stuff like this all the time… dunno, I'm just fed up. NYU isn't just a dream school… it's almost like a nightmare."

Update: NYU spokesman John Beckman tells us the flier is a fake, "Another satirical triumph for desktop publishing...I am sure the fake NY Times headline about the Iraq war will inspire many others." 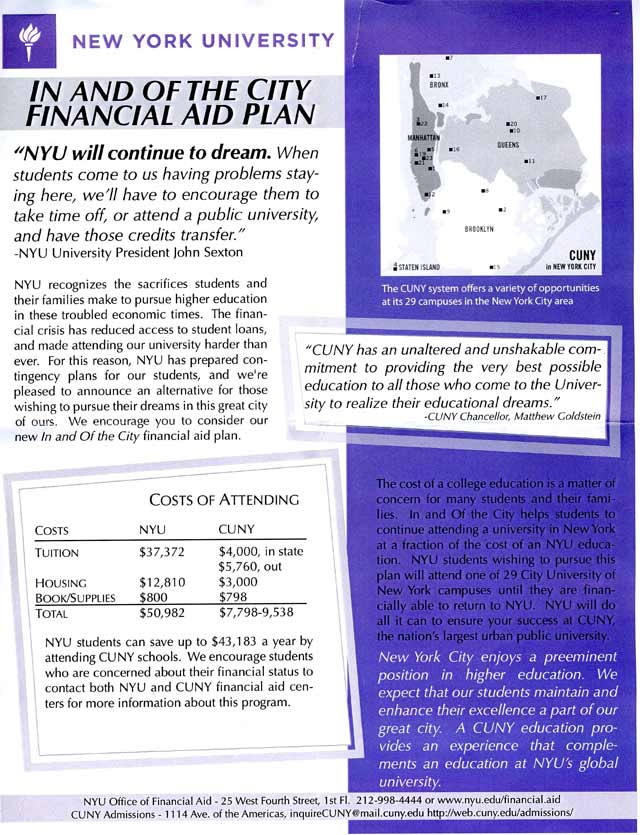 #CUNY
#financial aid
#john sexton
#NYU
#public schools
Do you know the scoop? Comment below or Send us a Tip