Starting this month, New York University will no longer consider every criminal conviction on an applicant's record, regardless of severity, as part of the undergraduate application process. Instead, the school is instating a new set of questions that require applicants to disclose whether they have been "convicted of or disciplined for violent incidents," according to a press release from the school.

The new category includes convictions involving violence, physical force or the threat of physical force, any sexual offense, possession of a weapon, kidnapping, arson, and "any offense which caused physical harm to another person."

School administrators said Monday that the new questions are intended to prevent blanket discrimination against applicants with criminal records, while addressing campus safety concerns. But a group of formerly incarcerated NYU students and their allies are countering that any attempt to differentiate between 'violent' and 'non-violent' crimes will still have an outsize impact on applicants of color.

"Since NYU took up this issue we have been constantly working to seek a balance between two principles: keeping our campus safe and ensuring that NYU gives people a second chance and lives up to its mission as an engine of social mobility," stated MJ Knoll-Finn, NYU's Vice President for Enrollment Management, on Monday.

"We must call out the false binary between so-called ‘violent’ and ‘nonviolent’ crimes," countered graduate student and Incarceration to Education Coalition (IEC) organizer Emma Pliskin in a statement. "We know that because of racial stereotypes, the police assume people of color are more violent than their white counterparts, and will be charged differently."

The group cites a report out this spring from the Sentencing Project, a nonprofit that advocates for sentencing reform, which found that black juveniles were more than four times as likely to be incarcerated than their white counterparts in 2013.

NYU is one of about 600 colleges and universities that use the Common Application, which requires applicants to check a box if they have ever been found guilty of a crime. This spring, dozens of IEC members occupied the Kimmel Center for University Life demanding that NYU go completely "box blind," meaning that it would stop making applicants disclose whether they've ever been convicted of any crime.

Studies have shown that having the box on college applications doesn't make campuses any safer, and NYU reached the same conclusion after an internal assessment of its own disciplinary records. "NYU took a look at the NYU disciplinary records of enrolled students who had checked the box against the overall undergraduate NYU population," Knoll-Finn stated. "We found no meaningful differences in the rates of infractions."

"Do we need to know everything encompassed by the Common App question, which includes questions about all high school disciplinary actions and criminal incidents?" she added, rhetorically. "We decided the answer was 'no.' What concerned us most was the prospect of violent crime."

The relevant new language for applicants to the NYU class of 2021, which went live Monday, is pasted below (highlights are ours). In March of last year, NYU revised its admission process to include two application readings: one that is "box-blind," and, if the applicant is a likely fit for NYU, a second that factors in the box. According to the school, "applications of those who indicate a criminal history in their applications are reviewed by a special review committee." 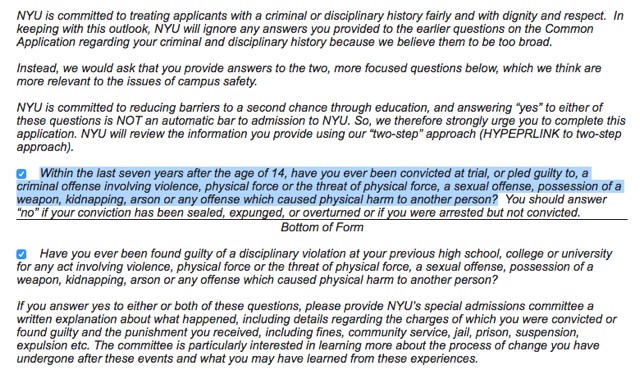 #ban the box
#criminal record
#NYU
#violent crime
Do you know the scoop? Comment below or Send us a Tip