“Marion,” a Manhattan woman in her early 60s, signed up for New York State’s medical marijuana program in the spring of 2016, a few months after it was opened to patients. Her doctor recommended it as a way to limit her use of oxycodone, which she takes to cope with chronic back pain from spinal stenosis and neuropathy. The extract she got—a sublingual tincture with a 1:1 ratio of THC, the main intoxicating ingredient in marijuana, and CBD, which is believed to have more of a painkilling effect—was supposed to reduce “breakthrough pain,” the pain that returns when her pills wear off before the next dose is due.

“It didn’t do the job,” she says. It tasted nasty and made her tired, and she couldn’t modulate the dose. She stopped buying it, but hopes to try again when vaporizable extracts become available at her dispensary.

“Why is it that we can’t get edibles?” she asks.

Nineteen months after New York’s medical marijuana program got off to an abysmally slow start, it appears to be making some progress. It now has more than 28,700 certified patients, according to figures released by the state Department of Health August 29th, and almost 1,200 registered practitioners participating, up from barely 200 when it started. The number of patients has almost doubled since chronic pain was added as a qualifying condition in late March.

But patients still have numerous complaints. “It has started to pick up a little,” says Kate Hintz, an organizer with Compassionate Care NY, whose 6-year-old daughter uses cannabis to control epileptic seizures, “but progress is certainly slower than most patients would like.”

At Governor Andrew Cuomo’s insistence, the 2014 law prohibits giving patients actual marijuana, so they are limited to the extracts developed by the “registered organizations” that run the dispensaries. Those come in tinctures, capsules, or vaporizing pens.

Many patients have problems finding a participating doctor. There are few dispensaries, particularly upstate, and a very limited choice of medications—sometimes only one or two products available, says Hintz. The most significant hurdle, according to Melissa Moore, deputy state director of the Drug Policy Alliance, is that prices are “prohibitive for many people.” A month’s supply of tincture costs slightly more than $200, and no insurance company will pay for it. In contrast, an ounce of marijuana can cost as low as $100 at Arizona dispensaries, according to Mikel Weisser of Arizona NORML.

There are no clear figures about how many of the certified patients are using the program regularly, Moore says, but anecdotally, she believes many have dropped out. Hintz says she stopped buying her daughter’s medication through the program “because the prices are so ridiculously high.” Other sources, she adds, are “vastly more affordable.”

Adding chronic pain to the list of 10 qualifying conditions was one of several changes urged by patients and advocates, along with increasing the number of dispensaries. On August 1st, the Department of Health announced that it had licensed five new registered organizations to manufacture and sell products derived from cannabis. That would increase the number of dispensaries in the state from 19 to 40, and open the first ones in Brooklyn and Staten Island.

The key chokepoint, according to Senator Savino, is finding doctors. Less than 2 percent of the state’s more than 80,000 physicians have gotten certified to recommend cannabis medication. The Department of Health recently announced that it would “streamline” the process by letting practitioners register online and shortening the course they need to qualify from four hours to two.

Prices are high, Savino says, because the business is “incredibly expensive to get into,” has a restricted number of customers, and still needs time to grow. Registered organizations have to pay the state $210,000 in fees before any setup or operating costs. Because marijuana is illegal under federal law, normal business practices like borrowing money, having a bank account, accepting credit cards, and taking health insurance are all subject to money-laundering laws.

The closest analogy is to casinos, where the state issues a limited number of licenses—but unlike casinos, dispensaries’ customers are sharply restricted. Expanding the list of eligible conditions is the only way to create a sustainable customer base, but otherwise, Savino doesn’t think the program needs major changes. The state mainly needs to “nurture it.”

Hintz blames high prices on “overregulation,” such as the rule that dispensaries have to have more extensive security-camera systems than regular pharmacies. The no-actual-marijuana rule, which requires a sophisticated manufacturing operation on top of tightly secured gardening, is the fundamental problem, she believes. “The closer you can stay to the original form of cannabis, the less expensive it’ll be,” Hintz says.

The Department of Health announced earlier this month that it would allow lotions, ointments, patches, and chewable and effervescent tablets and lozenges. It also said it would permit “certain non-smokable forms of ground plant material”—but as any form that can be smoked or eaten is considered “a threat to the public health,” the most that means is it “may potentially be formulated into an oral dosage form,” according to a department spokesperson. 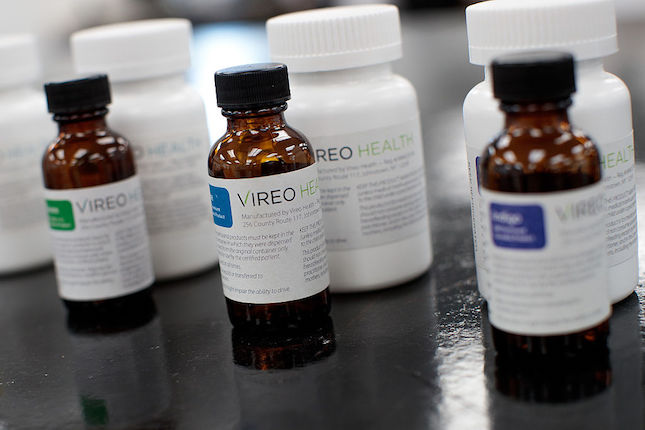 New York’s medical-marijuana law is one of the most restrictive in the nation. Among the 30 states that allow medical use, it’s one of the seven that don’t let patients use the actual plant, along with Florida, Louisiana, Minnesota, Ohio, Pennsylvania, and West Virginia.

“New York's medicinal cannabis program was drafted and designed primarily to be politically expedient, not to adequately serve the state's patient population,” says Paul Armentano of the National Organization for the Reform of Marijuana Laws. Its prohibition of smoked or edible preparations of cannabis, he adds, “unnecessarily limits patients' choices and denies them the ability to obtain rapid relief from whole-plant cannabis in a manner that has long proven to be relatively safe and effective.”

According to figures compiled by NORML, mainly from state government reports, New York now ranks ninth in the nation for the number of registered cannabis patients, behind New Mexico and Massachusetts, but ahead of Nevada and Washington. California, with almost 1.1 million patients, has more than all other states combined, with Michigan a distant second at about 220,000 and Arizona and Colorado third and fourth.

When California’s medical-marijuana program began in 1996, leading dispensary operators included a San Francisco gay-activist pot dealer, a woman severely injured in a car accident who’d decided to devote her life to helping others, and a reggae-rock singer who used the plant to treat depression. As the industry grew in places like Oakland and Colorado, it became more businesslike, but owners still often had roots in the marijuana-activist world.

New York’s registered organizations are more likely to be run by investment bankers and former pharmaceutical-company executives. The two CEOs of Fiorello Pharmaceuticals, which was recently approved to open dispensaries in Manhattan and Nassau, Monroe, and Saratoga counties, previously worked at Seagram and Pfizer, while PalliaTech’s board chair cofounded Russia’s first international investment bank. The top three executives at Columbia Care, which runs dispensaries in Manhattan, Riverhead, Rochester, and Plattsburgh, previously worked at Goldman Sachs, Staples, and PepsiCo.

If New York legalized marijuana for adult use, says Moore, the medical and recreational systems would be separate, but it would still increase availability and bring down costs. Meanwhile, she says, there are “plenty of examples” of programs working well in other states, such as Colorado.

Senator Savino says Colorado’s program is the best, as it’s bringing in enough revenue to fund the state’s education system. She also praises Connecticut’s, which opened to patients in September 2014. It allows medical-marijuana use for more than 20 conditions, has nine dispensaries open, and has about 19,500 patients registered. California’s was the worst before it established statewide regulations, she adds. New Jersey’s is also “not a good model” because the law gave too much power over implementing it to state regulators. That enabled Governor Chris Christie, who was “hostile to the idea of medical marijuana,” to stall the program to the point where only one dispensary had opened seven years after the law went into effect. Today, it has barely 10,000 patients registered.

Ultimately, Savino says, “we need to force Congress to pass legislation to legalize marijuana for medical purposes”—or at least get the federal government to remove it from Schedule I, which states that it has “no valid medical use.” This would resolve problems such as Colorado dispensaries having to deliver their tax payments to the state in cash, patients from one state not being able to obtain cannabis in another, and doctors’ fears that recommending it might risk their licenses.

“It’s crazy that you have 30 different sets of regulations. The federal government needs to recognize that it’s not going away. Enough already,” Savino concludes. “The safest way to kill off the black market is to establish a safe, legal, regulated market.”

That may be unlikely with Donald Trump in the White House and Republican control of Congress. Marijuana remains illegal under federal law, with cultivation a felony. New York's extract manufacturers would face a mandatory-minimum sentence of 10 years in prison if they were prosecuted.

State medical-marijuana programs now operate relatively unencumbered because of a 2013 Justice Department memo instructing federal prosecutors that they have better things to do with their resources than go after actions legal under state law. Attorney General Jeff Sessions could easily rescind that policy, but so far hasn’t.

For Hintz, the most important change the program needs would be to let physicians prescribe cannabis “regardless of what the condition is. Doctors should be the ones judging the severity of symptoms. The state should not be setting the criteria.” In March, the Department of Health announced that it had not found enough scientific evidence to allow cannabis use for muscular dystrophy, post-traumatic stress disorder, Alzheimer’s disease, dystonia, and rheumatoid arthritis.

“Markos,” a Brooklyn man in his early 60s, started on the program in July. He’d been cooking marijuana in olive oil to relive arthritis-related joint pain, but found it quickly went rancid when he tried to store it.

His wife’s health insurance covered the doctor who recommended it, and he’s taking a sublingual extract with a 20:1 THC-CBD ratio. While it costs $53—cash or debit card only—for a bottle that’s supposed to last a week, he’s found that a quarter of the recommended dose works. “If you hold it under your tongue for as long as you can, you feel it in 15-20 minutes,” he says. “It’s already doing what it’s supposed to do.” It gets him a little high, he adds, but it also calms and regulates his digestive system and helps him sleep.

“For years when I was working construction, I was taking Advil every day,” he says. “Once I started taking medical marijuana, it got me completely off that.”

#Albany
#andrew cuomo
#drugs
#marijuana
#medical marijuana
#original
Do you know the scoop? Comment below or Send us a Tip