New York’s upcoming medical marijuana program will look nothing like California's, where “green cards” may be issued for everything from insomnia to headaches. Instead, as advocates argued on Tuesday at Hostos Community College in the Bronx, the highly restrictive program will allow medical marijuana for only “a handful” of New Yorkers with certain conditions, and even they may have trouble accessing the state’s few dispensaries.

At the forum Tuesday, organizers with Compassionate Care NY and advocacy groups like VOCAL-NY, Boom! Health, and the Drug Policy Alliance argued that New York’s medical marijuana program will be far too small to make a big difference in residents’ lives: Preliminary regulations include only 10 diagnoses in the list of patients’ qualifying conditions, and allow for only five organizations to open four dispensary sites each, creating a total of just 20 medical marijuana dispensaries to serve the entire state and its population of 20 million.

Governor Andrew Cuomo, who fought against the Compassionate Care Act and even threatened to veto it, has acted as a barrier to the more inclusive medical marijuana policy advocates would like. His resistance forced the Compassionate Care NY coalition to make the restrictive concessions they are now hoping the Department of Health commissioner may revise.

With a February 13th deadline for public input on regulations drafted to implement the Compassionate Care Act [PDF] approaching, advocates for legal medical marijuana access are hurrying to gather enough support to convince NY’s Department of Health commissioner Dr. Howard Zucker to broaden the scope of the state’s medical marijuana program, which should be functioning as early as January 2016.

One major concern is that smoking of the raw cannabis flower is not allowed—a provision so strict organizers said it occurs in only one of the 22 states that allow for medical marijuana. New York’s program also bans marijuana edibles, allowing for only oil “extracts” that may be vaporized, swallowed in a capsule, or absorbed in the mouth. Each organization may produce no more than five “brands” containing DoH-approved concentrations of cannabinoids like Tetrahydrocannabinol (THC), which activates marijuana’s psychoactive effect, and cannabidiol (CBD), which is considered to have more medical uses, like reduction of seizures in patients with life-threatening Dravet’s syndrome.

Gabriel Falsetta, a forum attendee with New York City’s Veterans for Peace chapter, said he is concerned the cap on strains will not allow for individualized treatment that may help target patients’ unique needs. “When you get the chemist together with the grower to break the plant down, they can actually target various diseases,” said Falsetta, who said his daughter suffers from neuroblastoma and has been forced to turn to illegally receiving medical marijuana from California.

Bill Gilson, President of NYC’s Veterans for Peace chapter and a stage-four prostate cancer patient, was worried that the list of conditions approved is too restrictive. “I am speaking for veterans who do not have coverage for PTSD as one of the eligible conditions,” said Gilson, who added that “twenty-two veterans commit suicide every day in the United States.” 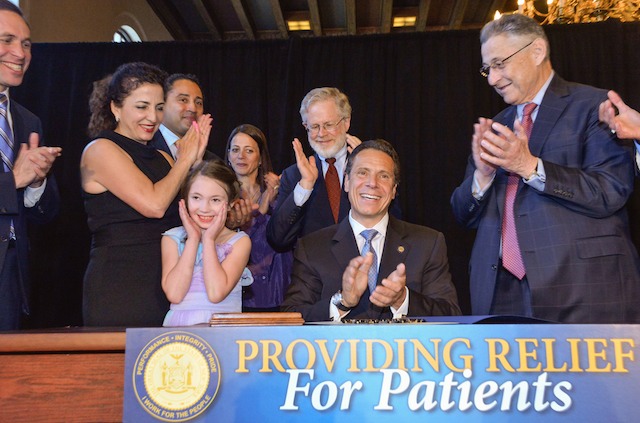 Councilmember Mark Levine, a speaker at the forum, was also concerned that the bill was overly exclusive, and noted that he has a personal investment in seeing the list of approved conditions expanded. “I suffer from migraines,” Levine said, adding that he would like to try to treat his condition with medical marijuana—only “legally,” of course. Levine also introduced Resolution 418, asking the state legislature to expand the Compassionate Care Act, which he says “excludes many diseases for which there is medical consensus that marijuana can truly benefit patients.” The Compassionate Care Act requires DoH commissioner Howard Zucker to consider adding PTSD—as well as Alzheimer’s, muscular dystrophy, dystonia, and rheumatoid arthritis—to the list of qualifying conditions.

Like other speakers, Levine also noted that the bill and proposed regulations will ‘adversely impact low-income patients’ because “[T]he bill does not allow patients to smoke marijuana, which advocates agree is the cheapest and most efficient way to consume it.” Other speakers expressed concern that the bill’s failure to allow insurance coverage from medical marijuana—something that is not unique to New York state—will stifle access for residents with smaller economic means.

The small number of dispensaries, too, may require patients to incur travel expenses or lose wages for days off spent seeking their medication from a distant provider. Though a $50 fee to apply for a medical marijuana card will be waived for low-income New Yorkers, the DoH has yet to provide a standard to determine who qualifies for the fee-elimination.

There is also concern that the program will create a "two-tiered system" in which New Yorkers who have been criminalized by marijuana prohibition will be locked out from benefitting from the new market. To become a certified producer, applicants must prove they have "sufficient facilities" or a bond of $2 million, and pay a $10,000 application fee in addition to a $200,000 registration fee, which is refundable if the application is rejected.

"In a state with an estimated of 83% of voters in support of medicinal marijuana, we can do better," Levine said in a statement. "The time to act is now to make important yet simple fixes to the Compassionate Care Act, which would not only make it a better law but also help fulfill its ultimate goal of comforting people in pain at a time when they need it most."

New Yorkers seeking to add their input to pending DOH regulations can learn how to become involved here.

#compassionate care act
#marijuana
#medical marijuana
#longform
#original
Do you know the scoop? Comment below or Send us a Tip