Last night's Community Board 2 meeting in Greenwich Village offered those mourning the death of Jessica Dworkin, the woman killed two weeks ago by a flatbed truck at the intersection of Sixth Avenue and Houston Street, a forum to recommend ways of making the dangerous intersection safer. Residents suggested delayed traffic lights, speeding cameras, and increased police presence as potential solutions. But not surprisingly, the NYPD's response seemed canned: "For all intents and purposes, I think it was just a terrible accident," said Community Affairs Officer for the 6th Precinct, Martin Baranksi. "You know, it happens." 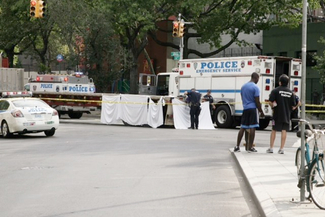 The scene of the accident. (Alex Tabak / Gothamist)

Baranski's comment infuriated attendees and Board members alike. "Yeah, well it happens in our home!" shouted board member Maury Schott. The crossing guard for six schools near the intersection, Esperanza Dreja, said, "I'm afraid for my life … There's not even one sign indicating there are schoolchildren nearby." Despite the lengthy, fruitful discussion, Tuesday's meeting will likely produce few significant results.

Traffic committee chair Shirley Secunda said the board will work with the DOT, which has the power to enact quick changes like altering the pace of the crosswalk signs or increase signage at the intersection. But Juan Martinez, a policy analyst for Transportation Alternatives, noted, "There is no design change that can solve an intersection like that—enforcement has to be paired hand in hand."

Officer Baranski did assure the Board that "an accident of this nature is thoroughly investigated." Of course, by "of this nature," Baranski means an accident in which someone died. With only twenty-three officers on the department's Accident Investigation Squad, automobile crashes in which the victim isn't dead or expected to die are almost never investigated.

The AIS' methodology stands a chance of being improved: Board chair Shirley Secunda reported that three new bills are currently in City Council committee which, if passed, will revise the "dead or likely to die" rule, as well as require NYPD to have at least five accident investigation officers trained in each precinct. But as TransAlt recently reported, an increase in traffic police may mean more tickets for tinted windows.

By the end of the meeting, board and community members alike had proposed many fixes, each seeming to be bound by endless red tape. Additional speeding cameras require the approval of Albany, who has capped the number of cameras in the city at 100. Increased traffic-accident police presence will require the bills' making it out of committee, then actually passing a vote.

Bonnie Rivera, who was born and raised on West Houston and Sixth Avenue, remembered, "When I was twelve, I actually got hit at that intersection myself." Now, living in the same neighborhood with a special-needs son, she calls the intersection a "death trap." Rivera added, "A child is gonna be killed...We all know this is about to happen."

#AIS
#community board 2
#Jessica Dworkin
#nypd
#pedestrian fatality
#traffic
#original
Do you know the scoop? Comment below or Send us a Tip