NYPD's Handling Of Traffic Crash Investigations Will Be Investigated About 100 people gathered outside NYPD headquarters this morning to call on the NYPD to hold reckless drivers accountable, instead of routinely letting them cruise off into the sunset with "no criminality suspected." Many of those in attendance identified themselves as cyclists—or relatives of killed cyclists—but others turned out to represent pedestrians, including one Park Slope resident who was nearly killed while crossing Carroll Street in 2009. Witnesses, including a reporter for the NY Times, said the driver was speeding when he ran over Hutch Ganson at the intersection of Eighth Avenue and Carroll, but no charges were filed.

"I lost half my head," Ganson told us, adding that he sustained traumatic brain injury, a broken leg, all his ribs were broken, as well as the bones in his face, he was in a coma for a month, and wasn't released from the hospital until four months after the accident. Formerly an executive at AIG, he has been unable to work since the accident, and he now suffers from aphasia. Ganson and his wife Donna said they attended the rally because they want reckless drivers to face consequences for their actions.

Relatives of deceased artist Mathieu Lefevre, who was killed by a flatbed truck driver while biking in Williamsburg last month, were also at the rally, once again demanding an explanation from the NYPD about why the man who ran over their son and left the scene wasn't charged. Lefevre's mother Erika Lefevre told reporters, "I never expected to be standing in the same spot today where I stood over a month ago, asking the NYPD to please release the information it has about the death of Mathieu. In that month, we have made many, many requests to the NYPD for information, including Freedom of Information requests. But we've gotten almost nothing." (FYI, here's the accident report.) 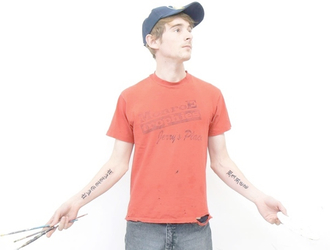 Lefevre's family is seeking a copy of the coroner's report, the videotapes that the NYPD says they have, and any other evidence. As previously reported, the detective at the NYPD's Accident Investigation Squad has not been responsive, and Lefevre's mother only learned that the driver—who was not found for several days—would not be charged by reading it in the media. Last month, an NYPD spokesman told us simply that the driver "did not know that he hit the cyclist." Lefevre's former wife, Juliana Berger, also spoke, and said that after the driver parked his truck two short blocks away, he drove past the scene of the accident in his personal car. "Why didn't he stop then?" she asked.

Transportation Alternatives Executive Director Paul Steely White announced this morning that the group would launch a comprehensive investigation into the NYPD's traffic crash investigation practices. The investigation will "closely review and evaluate" the NYPD's reports on scores of recent crashes that resulted in serious injuries or deaths. The group, which brought almost 3,000 letters from New Yorkers demanding "traffic justice," hopes the probe "will uncover whether police investigators followed proper procedures." The NYPD's "cavalier attitude to the epidemic of lawless driving is absolutely unacceptable," White said.

Public Advocate Bill de Blasio also announced that his office is looking into the NYPD's Accident Investigation Squad. Spokesman Wiley Norvell told reporters, "To New York State’s credit, recent laws enacted in Albany have put new tools in the hands of prosecutors to hold accountable people who kill or seriously injure others through negligence behind the wheel. One such law—Elle's Law—serves the critical purpose of taking dangerous drivers off the road. But we must ensure those laws live up to their potential and intent. To do so, today my office requested data from the New York City Police Department on its enforcement relating to Elle's Law and regarding the circumstances under which it deploys its Accident Investigation Squad."

Transportation Alternatives announced that between 2001 and 2010, 1,745 pedestrians and bicyclists have been killed in New York City traffic and 142,485 have been injured. According to an analysis of 80 contributing factors associated with crashes tracked by the New York State Department of Motor Vehicles, 60 percent of fatal pedestrian and bicyclist crashes with known causes are caused by driver’s dangerous and illegal behavior. Yet the NYPD routinely declines to charge drivers involved in these accidents, and today the group released this heavy tally of carnage, from 2011 alone:

#cyclists
#mathieu lefevre
#nypd
#traffic justice
#transportation alternatives
Do you know the scoop? Comment below or Send us a Tip