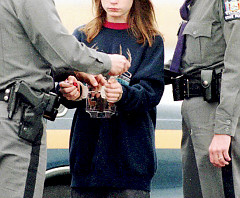 The NYCLU has fired off a sternly worded letter to NYPD Commissioner Ray Kelly demanding that police stop arresting children in public schools under the age of 16. The state's Family Court Act prohibits police from arresting kids younger than 16 without a warrant unless they've committed a crime. But according to NYPD data obtained in a Freedom of Information Law request, 309 kids under age 16 were arrested between 2005 and 2007 for offenses like disorderly conduct, loitering, or possession of marijuana or fireworks. (In one case, an 11-year-old was arrested for trespassing at his school.) The NYCLU maintains that most of these are non-criminal offenses.

In the letter (pdf here), NYCLU Director Donna Lieberman writes that "the number of such arrests suggests that NYPD personnel are either unaware of the legal mandate imposed by New York law or are deliberately ignoring it. New York law rests upon the sound public policy that children who commit relatively minor infractions should still be treated as children – not criminals. Our children are being pushed from school directly into the criminal justice system." She also notes that with 5,000 school safety agents and at least 200 armed police officers in the city’s public schools, "there are more police personnel patrolling our school hallways than are patrolling the streets of Detroit, Boston or Washington, DC."

The Police Department’s chief spokesman, Paul J. Browne, defended the arrests in a statement: "A juvenile (person under 16) cannot be prosecuted in Family Court for a violation-level offense. However, we do not believe that law enforcement is powerless to act to address unlawful activity such as fighting, marijuana possession and threats made to students and school personnel when committed by a person under the age of 16."