Police Commissioner Ray Kelly sat down to talk to Esquire's Scott Raab before the last round of bad press hit and the transcript has hit the transom. While the interview has some interesting factoids—Kelly plays calypso drums! And TiVos Jon Stewart and Stephen Colbert every night, which must be awkward!—the meat of it comes at the end when he talks about the NYPD's concerns with the 9/11 Memorial. Specifically that it might be an attractive place to kill yourself in a city that already has a reputation as a suicide destination. 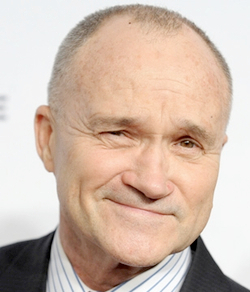 Kelly lays out the fact that the NYPD has seriously considered that the memorial's sunken pools might appear a good place to die. "We have to think of these possibilities," he said. "People might commit suicide. We're concerned about the possibility of somebody jumping in. This is what we're paid to think about."

To that end Kelly points out that the drop is "not as far as it looks. You might think you're gonna kill yourself, but it goes into about three feet of water." And anyway, "We actually have a plan for when that happens." As the Times notes, it isn't a crazy idea. The memorial, rather than serving as a source of comfort, can heighten feelings of either 'This is unjust' or desires for revenge of some sort," explains an associate professor of social work at Columbia. "They can feed into those negative feelings that the person is stuck in."

Still, despite nearly a million visitors since it opened last September, there have been no suicide attempts, yet. Just a silly tourist with a gun.

And of course, suicide isn't the only concern that Kelly and co. have with Downtown. "As it goes forward, security will be an issue," he points out, as if we weren't all well aware. "If something happens in New York, where does it happen? World Trade Center. What is the subway stop when you come into the PATH station? World Trade Center. It has to be a beautiful open space, but this is a target. We're the knuckle draggers that keep bringing this stuff up, but, hey, this is where you have people lined up. You have literally thousands of people there. It's symbolic, but it's substantive, too. It is a very target-rich environment."

#9/11 memorial
#9/11 memorial and museum
#manhattan
#nypd
#suicide
#wtc
Do you know the scoop? Comment below or Send us a Tip