A woman was assaulted on a subway train car on Tuesday morning, and the police say the suspect made anti-Hispanic remarks during the attack.

The incident took place at around 4:10 a.m., on a southbound 2 train near the White Plains Road and Pelham Parkway station in the Bronx. According to the NYPD, a 54-year-old woman "became involved in a dispute with an unidentified female," who then "proceeded to remove the victim’s contractor helmet and struck her in the face while making anti-Hispanic statements."

The victim suffered minor injuries and was taken to Einstein Hospital.

Police, who are investigating the assault as a hate crime, released an image of the suspect, who is described as having burgundy hair and was last seen wearing a camouflage scarf and all black clothing. 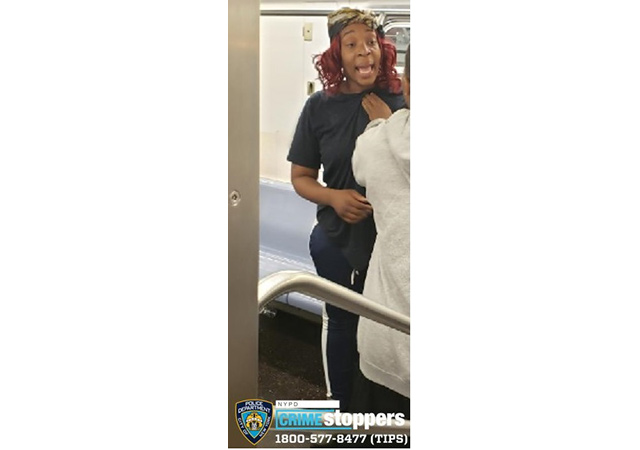 Image of the suspect (NYPD)

Anyone with information in regard to the identity of this female is asked to call the NYPD's Crime Stoppers Hotline at 1-800-577-TIPS (8477) or for Spanish, 1-888-57-PISTA (74782). The public can also submit their tips by logging onto the CrimeStoppers website at WWW.NYPDCRIMESTOPPERS.COM or on Twitter @NYPDTips.

#2 train
#bronx
#hate crime
#subway
Do you know the scoop? Comment below or Send us a Tip