Police are searching for a man who allegedly beat and tried to sexually assault a woman at knife-point in a Queens apartment earlier this month.

Police have identified the suspect as Nickoloas Samaroo, 21. 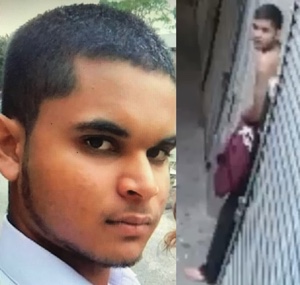 The NYPD says the incident took place around 3 a.m. on November 9th, at an apartment in 107-18 101 Avenue in Jamaica, and provided a graphic description of the attack, saying "the individual knocked out the 39-year-old female victim by punching her and kicking her repeatedly." When she regained consciousness, the suspect was allegedly trying to remove her pants, prompting her to engage him in conversation to distract him from taking off her clothing. From the police:

The suspect also fled on foot on 101 Avenue and then south on 108 Street.

The victim was treated for a laceration to her face and right leg at a nearby hospital.

Authorities released surveillance footage of the suspect leaving the building as well as a photograph. He is described as being 6' and 180 pounds and was last seen wearing black pants while carrying a red sweater. He also appears to be carrying his shoes.

#attempted rape
#queens
Do you know the scoop? Comment below or Send us a Tip
A new Gothamist is coming! We’ve moved comments over to our beta site. Click here to join the conversation and get a preview of our new website.