The NYPD released more surveillance images of people police officers would like to speak with about the May 5 beating of a gay couple near Madison Square Garden. 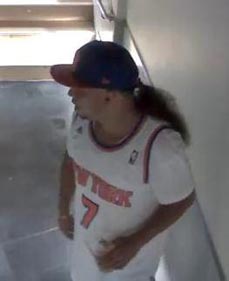 On that Sunday night, Nick Porto, 28, and his boyfriend Kevin Atkins, 22, had been walking on Eighth Avenue between 34th and 35th Streets when a group of Knicks fans harassed them. Porto had posted on Facebook, "A group of Knicks fans were upset about the game and they just decided to ‘fag bash’ the two of us. They broke my nose and his wrist, and broke several hundreds of dollars worth of personal property."

He also said, "They called us f----ts. They made fun of my jeans — I made the jeans myself, for that day," and, when he asked why the group was bothering them, explained, "Fists started flying. I was on the ground, and the only thing I could do, I reached out and grabbed someone's hair."

There has been a spike in anti-gay hate crimes recently. Free self-defense classes for the LGBT community are being offered by the city. Also, police urge anyone with information in regards to this incident is asked to call Crime Stoppers at 1-800-577-TIPS (8477). The public can also submit their tips by logging onto the Crime Stoppers website at www.NYPDCRIMESTOPPERS.com or by texting their tips to 274637 (CRIMES) then enter TIP577.

#crime
#gay bashing
#hate crime
#madison square garden
#nypd
Do you know the scoop? Comment below or Send us a Tip