For years the NYPD’s record of spying on law-abiding Muslims has been the subject of fierce public debate. Yet the NYPD is still refusing to acknowledge the existence of basic information related to its controversial and well-documented surveillance program.

Yesterday in an ornate courtroom next to Madison Square Park, the First Appellate Division of the New York Supreme Court considered two cases in which the NYPD had responded to public records requests by stating it could not “confirm or deny the existence of such documents.”

In both cases, one brought by a Rutgers University student and the other by a well-known Harlem imam, the Muslim appellants had reason to believe they had been subject to NYPD spying or surveillance. Both men requested records on themselves as well as organizations in which they have been involved, including the Rutgers University Muslim Student Association and the Mosque of the Islamic Brotherhood.

Arguing for the appellants, attorney Omar Mohameddi told the panel of judges that the NYPD had overstepped its authority by invoking the Glomar response, a Cold War era exemption employed by federal agencies when even acknowledging the existence or non-existence of records poses an alleged risk.

“[Glomar] is a blanket exemption that does not exist under FOIL,” Mohammedi said, referring to the state’s Freedom of Information Law. “We just need the NYPD to say, ‘we have the documents; we cannot produce them.’”

Although Glomar is increasingly invoked under the federal public information law, there is no precedent for its permissibility on the state or local level, and there is no Glomar exception written into New York State’s FOIL law.

Two lower courts had previously issued conflicting rulings in the lawsuits, brought by Samir Hashmi and Talib Abdur-Rashid. The two men filed FOIL requests in 2012, shortly after the Associated Press began releasing its Pulitzer-Prize winning series about the NYPD spying on Muslim communities.

Arguing for the NYPD, Devin Slack told the court that even disclosing the mere existence of records could threaten counter-terrorism investigations. If the NYPD confirms a paperwork trail and therefore discloses that someone is subject to surveillance, potential terrorists would simply avoid them, Slack said.

Every seat in the court’s gallery was filled, with many Muslim community members present. At times, the judges voiced concern about granting the city broad-reaching authority to publicly deny whether records exist or even if suspected surveillance occurred.

One justice, Rosalyn Richter, asked Slack, "Are you asking us to just say, because the city says so, it must be so?" 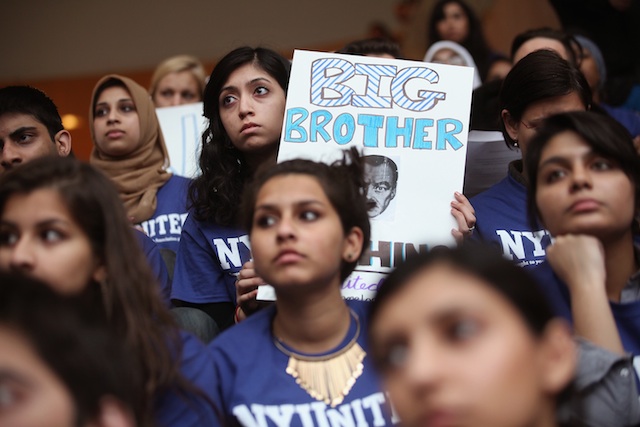 If the court permits the NYPD to invoke Glomar in records requests, it may further constrain the ability of both Muslim communities members, and the public at large, to hold the NYPD accountable.

Adam Marshall is a legal fellow at the Reporters Committee for the Freedom of the Press (RCFP), which filed an amicus brief in support of the two appellants. He told Gothamist that on the federal level, Glomar has been “disastrous for the public and the public’s right to know.”

The number of court decisions involving a Glomar response has increased dramatically over the years, as has the number of federal agencies issuing Glomars, which now includes the Internal Revenue Service, the Securities and Exchange Commission, and even the Post Office.

According to Marshall, challenging a Glomar response is extremely burdensome, because it generally requires the member of the public to first “pierce” the Glomar shield—namely, to prove that the government has elsewhere publicly acknowledged that the requested records exist.

In court, the NYPD contended that a ruling in its favor would not foreclose the public’s right to know. Slack stated that there are other avenues available to the public and affected individuals.

For example, he said, people facing terrorism charges receive disclosure of their records, and in the recently-settled Handschu v. Special Services, with regards to NYPD spying, plaintiff attorneys were able to review surveillance documents.

But there is a catch-22 to Slack’s logic. Since surveillance and undercover spying are by definition secret, obtaining information to hold the NYPD to account is very difficult.

Last fall, Gothamist reported that an undercover cop had spent years spying on Muslim students at Brooklyn College. Plaintiff attorneys in the Handschu case were ultimately able to question the NYPD about this investigation—but only because they learned about it in the stories that were published.

At a press conference just outside the court, Samir Hashmi spoke about the impact of surveillance.

“It is not fair for Muslims students that are law abiding citizens, that are going about their lives peacefully, that they have to be afraid of people watching what they do, and recording every word that they say," he said.

If the City loses, the NYPD would still be able to claim law enforcement exemptions under FOIL and refuse to release records, although they would have to acknowledge whether or not such records exist. The NYPD has an abysmal record of fulfilling FOIL requests. In 2013, then-Public Advocate Bill de Blasio gave the NYPD an F in a “Transparency Report Card.”

But the issue also goes beyond Muslim spying. “Everyone in NYC should be concerned about this, because the NYPD would be acting without oversight,” Mohammedi said outside the courthouse.

For Adam Marshall of the RCFP, the issue at the core of this judicial decision is the public’s right to know.

“When you have real questions circulating in society today about the relationship between law enforcement agencies and the public, whether its use of force, surveillance or any of those types of issues, people need information to make informed, rational decisions about what they want their government to be doing—and not doing.”

Aviva Stahl is a Brooklyn-based journalist who primarily writes about prisons, especially the experiences of terrorism suspects and LGBTQ people behind bars. Follow her @stahlidarity.

#FOIL
#glomar
#handschu
#nypd muslim spying
Do you know the scoop? Comment below or Send us a Tip