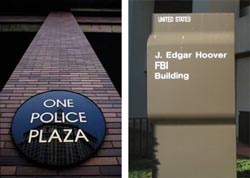 The NYPD is going to be constructing a secure facility at police headquarters to house and gain access to classified anti-terrorism intelligence previously limited to national organizations like the FBI. The center is known as a Sensitive Compartmented Intelligence Facility (SCIF) and access to the facility will only be granted to NYPD personnel with proper security clearances.

The SCIF was requested by Police Commissioner Ray Kelly, who has NYPD personnel working abroad to combat terrorism and gather information, but felt that the FBI had a choke hold on anti-terror data collected at the national level. He told The Washington Post, "People have information, and they want to control information. Controlling information is power, and they don't want to let it go -- it is as fundamental as that."

It took six years after Kelly's initial request in 2002 for the FBI to agree to share its information. At first, the Bureau was resistant to the idea because it didn't want the NYPD establishing independent links within the intelligence community. With NYPD personnel dispatched to several nations abroad and 1,000 officers dedicated to tasks similar to traditional foreign and domestic agency roles, the FBI conceded that this was happening anyway.

#anti terrorism
#fbi
#Intelligence
#nypd
#Ray Kelly
#scif
Do you know the scoop? Comment below or Send us a Tip