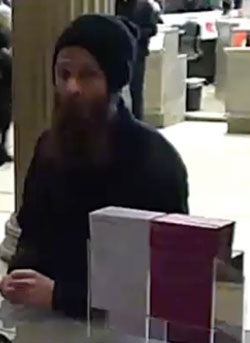 Police are looking for a man who allegedly assaulted a guard at the Metropolitan Museum of Art last Friday.

The incident occurred around 6:15 p.m. on March 3 at the museum at 1000 Fifth Avenue. According to the NYPD, the victim, a 46-year-old man, was "struck with a bottle by an unidentified individual after a verbal dispute."

The victim was a guard who allegedly told the attacker not to adjust a painting; the Post reports that the suspect thought the painting was crooked. From WABC 7:

The guard reportedly told him not to touch the art and to lodge his concerns with the information desk.

As the guard walked away, police say the man came up behind him and cracked him in the back of the head with the bottle, smashing it into pieces.

The suspect allegedly muttered "Do your job" as he walked away.

Police followed a trail of blood, believed left by the suspect, through two galleries and out of the building.

The guard suffered a laceration to his head and was taken to Weill Cornell Hospital in stable condition.

Police released an image and video of the suspect, who was described as being 20-25 years old, 5'8" and 150 pounds. He was last seen wearing all black clothing and has a large beard.

#assault
#metropolitan museum of art
#museum guard
Do you know the scoop? Comment below or Send us a Tip
A new Gothamist is coming! We’ve moved comments over to our beta site. Click here to join the conversation and get a preview of our new website.