The NYPD is asking for the public's help tracking down a man who allegedly took upskirt pictures of a woman at the Lorimer Street L stop in early August.

Investigators say a 32-year-old woman reported that a man was taking upskirt pictures of her while she walked up the stairs of the Manhattan-bound L train platform at Lorimer Street on August 8th at 4:40 p.m. The woman told cops that she felt the man's cell phone hit her leg, and when she turned around, he fled down to the Rockaway-bound platform and escaped by train. 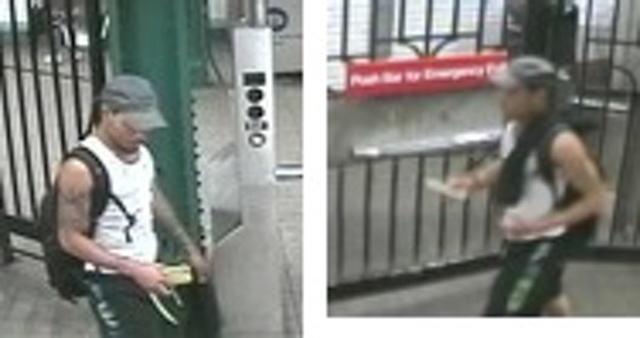 The suspect, captured on subway surveillance cameras, is described as being in his late 20s, standing 5'6" to 5'8" tall and weighing 145 pounds. He also has tattoos on both of his arms.

#brooklyn
#subway
#upskirt
Do you know the scoop? Comment below or Send us a Tip
A new Gothamist is coming! We’ve moved comments over to our beta site. Click here to join the conversation and get a preview of our new website.