A bump on the stairs of a Manhattan subway station resulted in a frightening encounter on Monday afternoon.

Police say a 47-year-old man was pushed into subway tracks, and now they are looking for the suspected shover, who is wanted for assault. 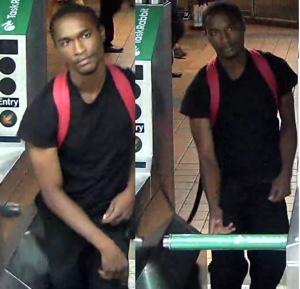 The incident took place on July 30th, at around 4:15 p.m. According to the NYPD, the victim was walking down the stairs at the Grand Central-42nd Street subway station to get to a 6 train when "he made incidental contact" with the suspect. When they got to the platform, police say the suspect then deliberately "bumped the victim from behind," prompting the victim to ask why he was bumped.

The suspect then allegedly challenged him to a fight and shoved him in the subway tracks. The victim was helped up by good Samaritans on the platform and taken to Bellevue Hospital for abrasions to his arms and legs.

The suspect, who fled, is described as being approximately 27-28 years old and approximately 5'8" with a thin build. Police released surveillance images of the suspect as well.

#6 train
#assault
#grand central
#subway
#we the commuters
Do you know the scoop? Comment below or Send us a Tip