NYPD: This Guy Followed Woman On Two Subways & Then Groped Her 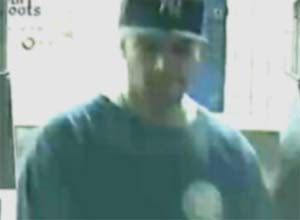 The police are asking the public to help them identify a suspect accused of forcible touching last month in a Bronx subway station.

According to the NYPD, on Monday, November 24th, at 12:40 p.m. a 33-year-old woman boarded a northbound B train at 125th Street. While on the train, cops say, "[T]he suspect, who was already on the train, attempted to strike up a conversation with her. The victim ignored the suspect and switched to the northbound D train at the 145 Street Station with the suspect in tow. The victim subsequently detrained at the Kingsbridge Road and Grand Concourse and while she was climbing the exit stairs, the suspect grabbed her buttocks and then fled the station."

Police released surveillance images of the suspect, who is wearing a Local 731 sweatshirt and a baseball cap. Anyone with information in regards to this forcible touching is asked to call the NYPD's Crime Stoppers Hotline at 800-577-TIPS. The public can also submit their tips by logging onto the Crime Stoppers Website at WWW.NYPDCRIMESTOPPERS.COM or texting their tips to 274637(CRIMES) then enter TIP577.

#bronx
#crime
#forcible touching
#groping
#subway
#subway pervert
Do you know the scoop? Comment below or Send us a Tip