The NYPD is currently testing a mobile van-mounted unit that can scan pedestrians for concealed weapons. As we reported a year ago this month, the department is experimenting with infrared technology that will enable police officers to detect whether individuals are carrying guns under their clothing. We know from The Matrix that the human body emits over 25,000 B.T.U.'s of body heat, and the NYPD's Machines will enable authorities to see when that heat is being blocked by a significant chunk of metal, like a gun.

The mechanism, which the NYPD developed with help from the U.S. Department of Defense and police in London, was delivered to the department last week. At his annual State of the NYPD address at the Waldorf-Astoria this morning, Kelly announced the following:

The device reads a specific form of natural energy emitted by people and objects known as terahertz. If something is obstructing the flow of that radiation, for example a weapon, the device will highlight that object. Over the past twelve months, we’ve been working with the vendor and the London Metropolitan Police to develop a tool that meets our requirements. We took delivery of it last week.

One of our requirements was that the technology must be portable... we’re able to mount it in a truck. These images are from a recent test we conducted with an officer carrying a hidden handgun. You get a sense of why we’re so hopeful about this tool. We still have a number of trials to run before we can determine how best to deploy this technology. But we’re very pleased with the progress we’ve made over the past year.

Last year it was reported that the devices only had a range of three or four feet, but Kelly was hopeful they could improve it to scan citizens from a distance of up to 25 meters away. It's unclear what the current range is, but we're sure it's going to be controversial no matter what the distance. NYCLU Executive Director Donna Lieberman said, "We have no idea how this technology works, if it is effective, and what its error rate is. If the NYPD is moving forward with this, the public needs more information about this technology, how it works and the dangers it presents."

And here's a look at the thing which will soon be looking at you. Smile!: 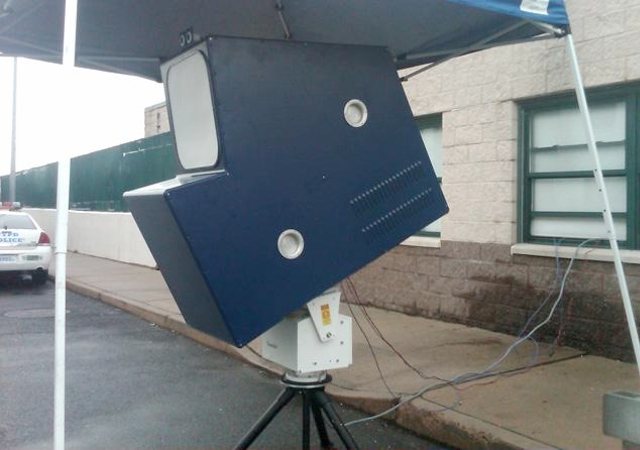 #nypd
#police state
#Ray Kelly
#scanners
Do you know the scoop? Comment below or Send us a Tip