A 4 train rider's stolen wallet ended up with suspects who like luxury goods. 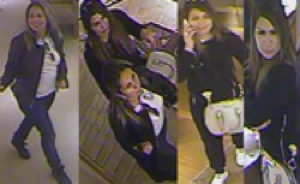 According to the NYPD, a 29-year-old woman boarded a southbound 4 train at Grand Central Terminal on October 21st at 5:30 p.m.: "[The victim's] bag [was] jostled while en route to Bowling Green, where upon disembarking she discovered that her bag was open and her wallet containing credit cards and personal identification documents had been removed."

Anyone with information in regards to this incident is asked to call the NYPD's Crime Stoppers Hotline at 800-577-TIPS. The public can also submit their tips by logging onto the Crime Stoppers Website or texting their tips to 274637(CRIMES) then entering TIP577. All calls are kept strictly confidential.

#4 train
#grand larceny
#gucci
#louis vuitton
#subway
Do you know the scoop? Comment below or Send us a Tip