Around ten lawsuits were filed against the city per day in 2013, according to a new crunching of the comptroller's ClaimStat figures by NYC data blog I Quant NY.

ClaimStat makes public every legal claim against the city, and was presented by comptroller Scott Stringer in July, in an attempt to save costs. Stringer's original report said that the 2015 budget would have to include $674 million for settlements and judgments (an amount greater that the budget for the Parks Department, Department of Aging and New York Public Library combined).

The release of data is part of a larger effort for transparency and also to help develop data-driven money saving methods. For example, in 2010 the budget for tree pruning was sharply reduced. ClaimStat showed that the move backfired. The report said that several multi-million dollar settlements resulted from death and injuries caused by falling branches, and these ended up costing more than twice of the budget of tree trimming.

Okay, so more money for pruning, problem solved. Unfortunately not all ClaimStat's problems can be fixed so easily. Along with tree, sewage and sanitation claims, the report showed that lawsuits and claims filed against the NYPD rose nearly 31 percent from 2008 - 2013 to $137.2 million. And recent numbers from the Law Department say that in the past five years, New York City taxpayers shelled out $428 million in NYPD-related settlements.

I Quant NY found a way to unlock the police data that lies underneath ClaimStat's maps, and organized the data by location, for a more detailed look at the claims against the NYPD. The website also took a look at Eric Garner's neighborhood, finding that there were 109 lawsuits that originated in Staten Island and three within a two block radius of Garner's home, marked by the red star. 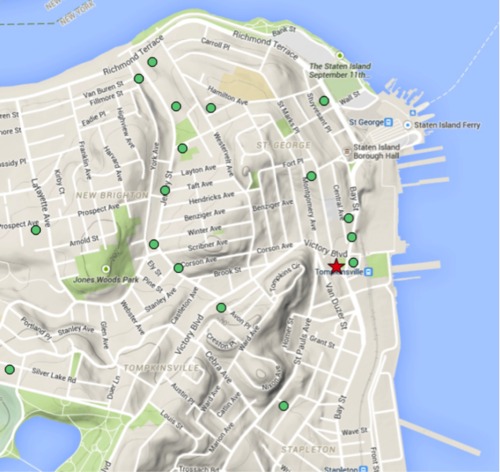 Head on over to I Quant NY to check out their interactive table of every neighborhood, so you can see how litigious your neighborhood is.

#data
#lawsuits
#nypd
Do you know the scoop? Comment below or Send us a Tip