As furor mounts over the NYPD's seeming inability to curb the hoards of illegal dirt bike riders who regularly terrorize the city, the department fired off a press release touting its motorcycle-confiscation efforts so far this year. The p.r. push comes days after a shocking video showed an SUV driver mowing down a group of motorcyclists, severely injuring one, and a high speed chase that ended with a brutal assault in Washington Heights.

Year to date (through Oct. 3), the NYPD has issued 5,498 summonses to motorcycle operators and seized 1,440 motorcycles, quad and dirt bikes - including 57 vehicles on Sunday, Sept. 29 - citywide.

Patrol personnel have made 437 arrests, including 187 for reckless endangerment or reckless driving. Other offenses include motorcyclists operating without a license or with a suspended license, without registration or insurance, or with altered VINs or license plate violations.

Across the city police have conducted 25 motorcycle-enforcement initiatives to deter and cite dangerous or illegal motorcycle and other motorized bike operation. This includes deployment of police helicopters which help to inform ground units of problematic areas. 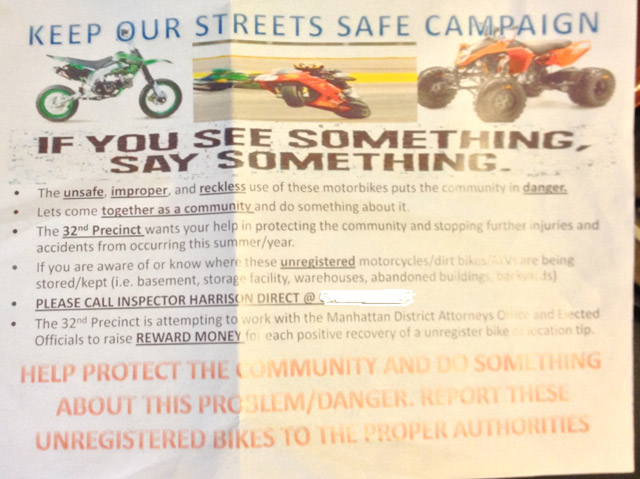 NYPD poster of "an initiative in Harlem’s 32nd Precinct encouraging the reporting of illegal and dangerous motorcycle operation is among dozens of motorcycle-enforcement initiatives conducted by NYPD in 2013."

#dirt bikes
#motorcycle rally road rage
#motorcyclists
#motorocycle
#nypd
#summons
#original
Do you know the scoop? Comment below or Send us a Tip