Police are searching for a man who exposed himself and groped a woman in a Midtown subway station shortly after 10:20 p.m. Saturday night. The 32-year-old woman had reportedly just missed a northbound 6 train at the 23rd Street and Lexington Avenue station when a stranger approached her, grabbed her arm and inner thigh, and exposed his genitals.

According to a police spokesperson, the man then demanded she perform oral sex, and yelled at her to shut up when she screamed. The woman was able to break away from her attacker and ran out of the station.

Police describe the man as in his 30s, 5'9" and 180 pounds with brown eyes, a shaved head, and goatee. He had been wearing a red shirt and tan cargo shorts at the time of the assault. Police confirmed that the Special Victims Unit is investigating, and no arrests have been made. 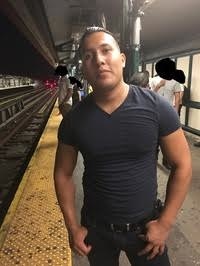 Police released this photo of the suspect in the 7 train station sexual assault. (DCPI)

Almost 24 hours earlier at the 74th Street and Roosevelt Avenue 7 Train station in Queens, a 31-year-old woman was reportedly groped while riding up an escalator with her teenage son. According to the police, an unidentified man (seen here) grabbed the woman's buttocks from behind, and then quickly fled. The assault happened shortly before 1 a.m. Saturday. Police are searching for a 25-year-old man, 5'5", 150 pounds with brown eyes and brown hair last seen wearing a dark blue t-shirt and jeans.

Finally, the NYPD is searching for the man who groped a 22-year-old woman inside the Norwood Avenue J train station in Brooklyn. At roughly 3:20 p.m. Sunday, a man approached the woman from behind and grabbed her buttocks, then immediately fled the station out into the street, according to police. The attacker is described as 18-21 years old, between 5'6" and 5'8", 160 pounds with an orange afro. He was last seen wearing navy blue pants with a star print.

Here's video released by the NYPD:

Oh, and that 7 train upskirter / Phillies fan remains at large.

#sexual assault
#subway
#subway pervert
Do you know the scoop? Comment below or Send us a Tip