Two years after the Manhattan D.A.'s office declined to pursue sexual assault charges against the powerful movie producer, the NYPD is looking at Harvey Weinstein once again after a series of bombshell reports detailing of decades of allegations related to sexual harassment and assault—including rape.

"It’s not like they’re going to talk to everyone Weinstein has ever talked to. It’s more if anyone’s been a victim or feels like they’ve been a victim, come forward," a law-enforcement source told DNAinfo.

Another police source described Weinstein as a "super predator. His conduct shows he’s been at this a long time, and he’s a professional at it. He’s been at this so long, there’s no way there are not other victims out there. Imagine how many promises he’s made to these young women who were trying to make it into the industry."

in 2015, Weinstein was accused of groping the "private area and... breasts" of Italian model, Ambra Battilana Gutierrez, in his Tribeca office. However, D.A. Vance's office declined to press charges, saying, "After analyzing the available evidence, including multiple interviews with both parties, a criminal charge is not supported." 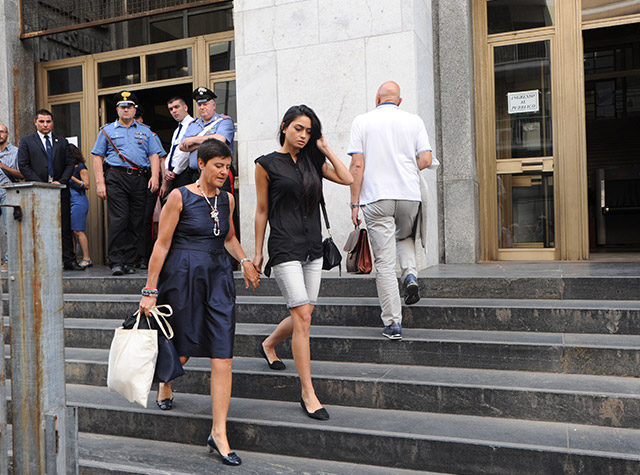 Last week, the NY Times revealed that Weinstein had settled the incident with Gutierrez, one of at least eight settlements to allegedly cover up Weinstein's pattern of predatory behavior of women. This week, the New Yorker published its story about Weinstein, featuring numerous women who accused him of sexual harassment as well as rape.

The New Yorker also released the NYPD's sting recording of Weinstein pressuring Gutierrez to enter a room at the Tribeca Grand hotel. She says, "I don't feel comfortable... Please I don't want to do something I don't want to do." Weinstein tries to reassure her, "I'm a famous guy... I am not going to do anything, I swear on my children."

"Why yesterday you touch my breast?" Gutierrez asks. To which he replies, "Oh, please, I'm sorry, come on, I'm used to that... I won't do it again."

A police source told the New Yorker, "We had the evidence. It’s a case that made me angrier than I thought possible, and I have been on the force a long time." Former prosecutors told Gothamist that the audio was enough to charge Weinstein, but suggested the Oscar-winning producer's powerful reputation may have made Vance think twice. Vance reportedly received a $10,000 donation from one of Weinstein's attorneys after the case was dropped.

Another allegation in the New Yorker came from Lucia Evans was a college student when she says Weinstein approached her in a club in 2014: "Evans wanted to be an actress, and although she had heard rumors about Weinstein she let him have her number." When Weinstein called her late at night or tried to set up meetings with him, she said she'd read lines with someone in casting.

Before long, an assistant called to set up a daytime meeting at the Miramax office, in Tribeca, first with Weinstein and then with a casting executive, who was a woman. “I was, like, ‘Oh, a woman, great, I feel safe,’ ” Evans said.

When Evans arrived for the meeting, the building was full of people. She was led to an office with exercise equipment and takeout boxes on the floor, where she met with Weinstein alone. Evans said that she found him frightening. “The type of control he exerted, it was very real,” she told me. “Even just his presence was intimidating.”

In the meeting, Evans recalled, “he immediately was simultaneously flattering me and demeaning me and making me feel bad about myself.” Weinstein told her that she’d “be great in ‘Project Runway’ ”—the show, which Weinstein helped produce, premièred later that year—but only if she lost weight. He also told her about two scripts, a horror movie and a teen love story, and said one of his associates would discuss them with her.

“At that point, after that, is when he assaulted me,” Evans said. “He forced me to perform oral sex on him.” As she objected, Weinstein took his penis out of his pants and pulled her head down onto it. “I said, over and over, ‘I don’t want to do this, stop, don’t,’ ” she said. “I tried to get away, but maybe I didn’t try hard enough. I didn’t want to kick him or fight him.” In the end, she said, “He’s a big guy. He overpowered me.” At a certain point, she said, “I just sort of gave up. That’s the most horrible part of it, and that’s why he’s been able to do this for so long to so many women: people give up, and then they feel like it’s their fault.”

On Wednesday, Vance defended not prosecuting Weinstein, saying, "Our best lawyers looked at the matter. I, like they, was very disturbed at the contents of the tape. It’s obviously sickening, but at the end of the day we operate in the court of law, not in the court of public opinion."

Vance added, "We really did what I think the law obligates us to do — focus on the evidence and the facts that we had. We relied on the true professionals to help guide us to the decision, which is not always going to be the popular decision."

Earlier this week, Chief Assistant D.A. Karen Friedman-Agnifilo in the Manhattan D.A's office said in a statement, "If we could have prosecuted Harvey Weinstein for the conduct that occurred in 2015, we would have. Mr. Weinstein’s pattern of mistreating women, as recounted in recent reports, is disgraceful and shocks the conscience. Any individual who feels that she may have been the victim of a crime by this person in Manhattan is strongly encouraged to contact our Office’s Sex Crimes Hotline at (212) 335-9373."

Weinstein accused the NY Times of "reckless reporting" after the initial story but also admitted he had behaved badly in unspecified incidents. A spokesperson told the New Yorker, "Any allegations of non-consensual sex are unequivocally denied by Mr. Weinstein. Mr. Weinstein has further confirmed that there were never any acts of retaliation against any women for refusing his advances. Mr. Weinstein obviously can’t speak to anonymous allegations, but with respect to any women who have made allegations on the record, Mr. Weinstein believes that all of these relationships were consensual. Mr. Weinstein has begun counseling, has listened to the community and is pursuing a better path. Mr. Weinstein is hoping that, if he makes enough progress, he will be given a second chance."

Weinstein, who was fired—by email—from the movie production company he co-founded, has reportedly flown to Arizona for sex addiction rehabilitation.

Outside his daughter's L.A. home, Weinstein told reporters on Wednesday, "Guys, I’m not doing OK but I’m trying. I gotta get help. I’m hanging in, I’m trying my best."

#ambra battalina Gutierrez
#cy vance
#harvey weinstein
#manhattan da
#miramax
#nypd
#rape
#sexual harassment
#weinstein company
Do you know the scoop? Comment below or Send us a Tip
A new Gothamist is coming! We’ve moved comments over to our beta site. Click here to join the conversation and get a preview of our new website.