Nearly two-and-a-half years since they were first erected, the protective NYPD barricades have been removed from around the Wall Street Bull.

The barricades were originally constructed to protect the statue, fragile egos, and the Stock Market from the vandalism, emasculation, and predatory lending by Occupy Wall Street protestors. OWS is now a thing of the past, and the orders have come down to give the Bull back to the people. No word on if any of the money lost as a result of 2007-2008 financial collapse or the bailout or credit default swaps will be released to the people...oh well, there's always high-frequency trading. By your bootstraps!

The Charging Bull has become a symbol for Wall Street since its unauthorized installation by Italian-American artist Arturo Di Modica, who spent $360,000 of his own money to cast the 7,000 pound bronze sculpture, placing it downtown in the middle of Broad Street 1989. What could be a better symbol for the noble profession of investment banking than Di Modica's sound financial planning? It was removed by police and reinstalled at its current location in Bowling Green plaza.

For Di Modica, the bull is representative of the "strength and power of the American people," and was singularly responsible not only for motivating Wall Street out of despair and into action following the stock market crash of 1987, but for the unwavering stability of the financial industry thenceforth. Remember when someone painted the bull's balls blue back in 2008? 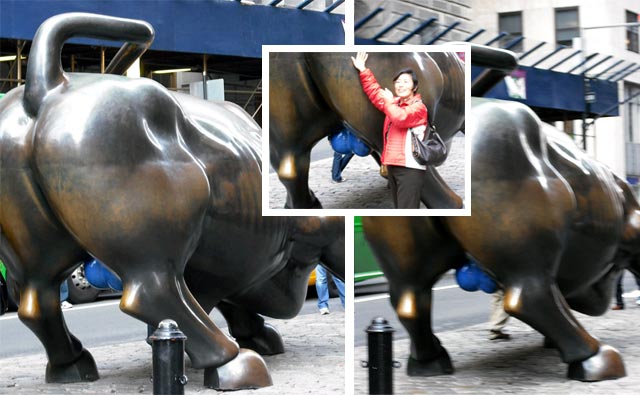 Wall Street has cashed in and crushed out the bronze symbol like a year-end bonus, and optimism has never been higher. It's like home-field advantage for overworked, out of touch financial analysts that spend all day looking at Bloomberg Terminals, desperately searching for meaning while betting that you'll miss your latest credit card payment.