At a press conference this afternoon, Police Commissioner William Bratton and NYPD Chief of Manhattan Detectives William Aubry described the circumstances leading up to the fatal shooting. They said that uniformed officers Geraldo Casaigne and Lauren O'Rourke were at the corner of 37th Street and 8th Avenue just after 10 a.m. when they observed an individual fitting the description of Baril (cops had already matched his subway pic to the mugshot via facial recognition software).

He was wearing a mask and hood this morning, and when the officers approached him, police say he took out his hammer and made a motion to swing at O'Rourke. You can see surveillance video of the incident below.

Bratton and Aubry said that Baril, who is a Bronx native, has paranoia and schizophrenia, and had been staying at a mental health facility in upper Manhattan before he checked himself out recently. Cops believe he may have been living in the street or subway. Baril has eight prior arrests, including an incident in which he tried to attack a cop on Roosevelt Island.

They added that Baril may have put a photo on one of his social media accounts last year showing a bloody hammer. They didn't specify where, but Vocativ found an Instagram account they believe belongs to Baril that included lots of disturbing, graphic poetry. One such poem from 2014 titled "Blood Stains" reads, "I brought a gun to this fight time to die..."

Update: It appears that the photo the NYPD referenced is a photo of a drawing Baril made of a bloody hammer: 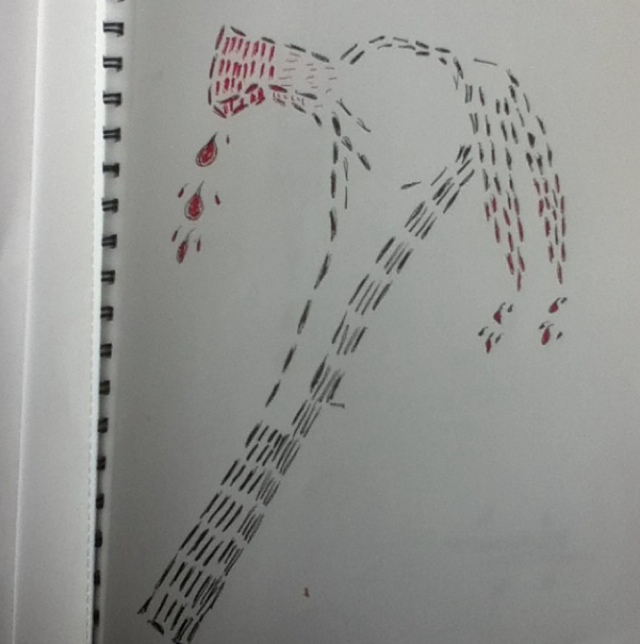 #David Baril
#hammer
#midtown
#nypd
#police
#shooting
#original
Do you know the scoop? Comment below or Send us a Tip