The police are hoping the public can help them identify a man accused of groping an 11-year-old girl in Park Slope last week. Investigators believe he may be the same suspect who fought off a police officer who was trying to arrest him on Monday.

According to the NYPD, an 11-year-old girl was walking in front of 397 Fourth Street (by 6th Avenue) just after 4 p.m. on Monday, November 11th. A man approached her from behind, squeezed her buttocks, and then fled. The victim was not injured. Police released the sketch of the forcible touching suspect (pictured above) and described him as a white male, about 25-35 years old, 5'9" - 5'11" tall with a slim build. He is pictured in the sketch wearing a cap and with and without glasses. 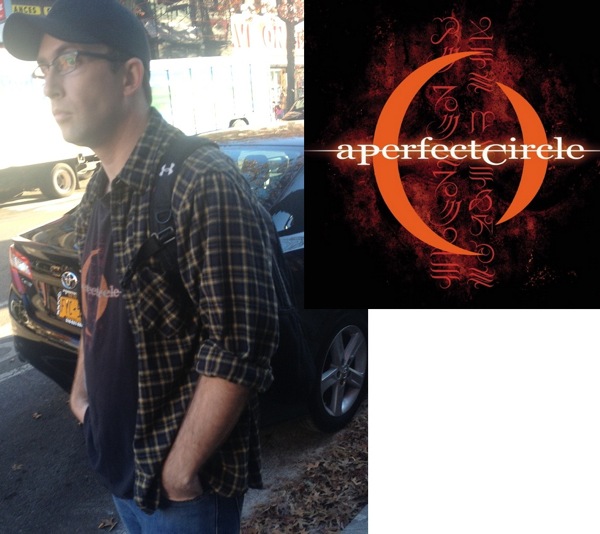 On Monday, November 18th, police officers had been investigating a forcible touching incident when they stopped to question a man at 5th Avenue and 9th Street in Park Slope. Police say he assaulted the police officer—dislocating the female cop's shoulder—and fled the scene.

This suspect was described as a white male wearing a "Perfect Circle" t-shirt. A photograph of the suspect (right) shows him with glasses and a cap.

It's believed that the suspect may be involved in other forcible touching incidents.

Anyone with information in regards to this assault is asked to call the NYPD's Crime Stoppers Hotline at 800-577-TIPS. The public can also submit their tips by logging onto the Crime Stoppers Website at WWW.NYPDCRIMESTOPPERS.COM or texting their tips to 274637(CRIMES) then enter TIP577.