Police have released a sketch of the man who followed a hijab-wearing Muslim MTA worker off a subway train into Grand Central and pushed her down a flight of stairs on Monday. Officers describe the attacker as 25-35 years old, 5-foot-9 to 6 feet tall, and 150-180 pounds. He was last seen wearing a dark jacket and a black knit beanie.

Soha Salama, 45, was on the 7 train, headed to work as a station agent at around 6:20 a.m. Monday when police say the man approached, called her a terrorist, and told her "go back to your country." Salama disembarked at Grand Central Terminal and the man followed her, continuing to berate her with Islamophobic remarks, police said. When she reached a set of stairs, he pushed her, causing her to bash her right knee and twist her right ankle, according to the NYPD.

Salama told the New York Post she has lived in New York City for 20 years and never experienced such abuse. "I think this hate is raised after the election," she said, blaming President-elect Donald "There's something going on" Trump for fomenting anti-Muslim sentiment. "He leads people in the wrong direction."

Despite being surrounded by people throughout the ordeal, no one intervened, and Salama had to track down police officers herself, she said. The cops helped her into the station where she works, and summoned paramedics who transported her to NYU Langone Hospital.

Police told the New York Times that there has been a 35 percent increase in reported hate crimes so far this year, compared to the same period last year, and that there have been 43 possible hate crimes since Election Day, double the number reported during the same stretch of 2015.

Because this sort of thing should not be allowed to become routine, here is a photo of a marketed swastika with the message "PRAISE TRUMP" that a tipster sent yesterday, one of several such small graffitos that readers have flagged around the city in the last week or so, since they stopped garnering widespread press coverage. The message was spotted at the corner of 51st Street and Ninth Avenue in Hell's Kitchen. 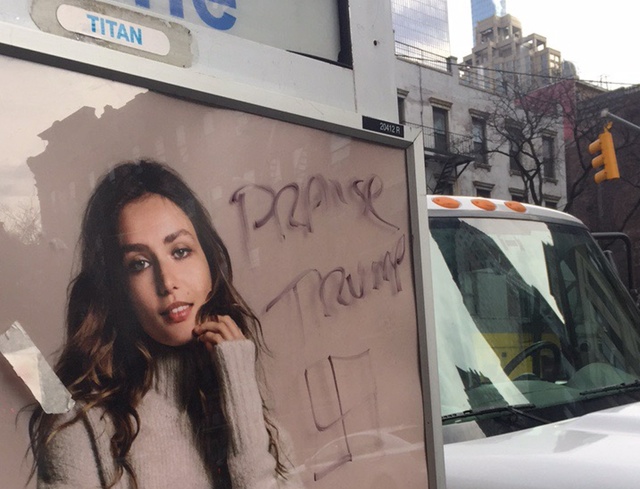