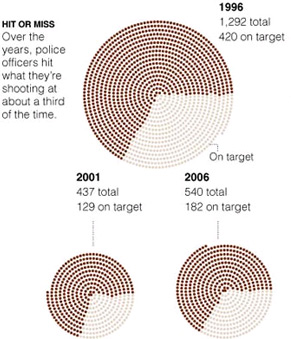 The NY Times looks at NYPD firearms use between 1996 and 2006, finding that though cops are using their guns less these days, "when they do fire, even at an armed suspect, there is often no one returning fire at the officers. Officers hit their targets roughly 34 percent of the time."

The NYPD only recently released the information, which the New York Civil Liberties Union says "raises serious questions about police shooting practices and about the lack of racial diversity in the NYPD’s leadership," given that "During the last two years the NYPD reported the race of those shot by police, nearly 90 percent of the people shot at by officers were black or Latino."

NYPD spokesman Paul Browne said, "The data shows that the New York City Police Department is the most restrained in the country" (the city's cops hit their targets 34% of the time, while, per the Times, the stats for Los Angeles cops was 29% last year).

Still, the NYCLU says in spite of the complexity of shootings, "But what is clear is when you look at police shootings over time, and you look at other police practices over time, that race emerges as a very big issue. And the police department has got to simply confront that."

You can view 11 years of NYPD Firearms Discharge Reports here, and the NY Times has some interesting graphics (example, left) illustrating the trends.

#gunfire
#nyclu
#nypd
#police shootings
#shootings
Do you know the scoop? Comment below or Send us a Tip
A new Gothamist is coming! We’ve moved comments over to our beta site. Click here to join the conversation and get a preview of our new website.