After two incidents of X-treme attention whoring Thursday afternoon, cops were stationed around the perimeter of the New York Times building on 41st St. Friday, successfully preventing anyone else from taking a shot at scaling the side of the new skyscraper. Famous urban climber Alain Robert drew quite a crowd as he climbed up the side of the building around noon and then unfurled a banner decrying the human toll of global warming. The spectacle drew quite a police response and large crowds of spectators. Robert was released on bail shortly after being removed from the side of the building. 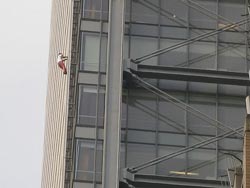 Hours later, a second man was attempting to duplicate Robert's publicity stunt. Renaldo Clarke, Brooklyn resident and IT manager at a marketing firm, was spotted also climbing the side of the building in what he described was an attempt to raise awareness about malaria prevention. Clarke said he had planned his climb and didn't realize Robert already managed it; a prosecutor said Clarke explained, "I heard that some other guy had done it, and I was disappointed."

The Times is working with Forest City Ratner (48% owner of the building) and police to prevent similar incidents. Short-term measures include slapping plywood sheets onto the facade to eliminate gaps that gave the climbers access to the ceramic rungs they used in their climbs. Security personnel are also being hired and stationed outside the building. NY Times company vice chairman Michael Golden, though, admitted that no one thought the building's ladder-like design would tempt climbers.

Frenchman Alain Robert has scaled approximately 70 buildings around the world and said that the Times building was an obvious choice because of its series of ceramic rods, which are supposed to serve as an energy-saving feature. On a scale of one to ten, with 10 being the most difficult challenge, Robert ranked the Renzo Piano-designed Times building a one.

#climb
#new york times building
#police
#publicity
#Renaldo Clarke
#robert alain
#security
#spiderman
#stunts
Do you know the scoop? Comment below or Send us a Tip
A new Gothamist is coming! We’ve moved comments over to our beta site. Click here to join the conversation and get a preview of our new website.