In response to a recent spate of cyclist deaths on New York City streets, Mayor Bill de Blasio and the NYPD have shared plans for a "major enforcement action" aimed at reducing bike-related injuries and fatalities. It will last three weeks, and primarily involve basic enforcement duties that police are, in theory, already responsible for completing.

According to a memo released by the department on Tuesday, NYPD personnel have been ordered to pay special attention to parking and moving violations between now and July 21st. Those offenses include speeding, red light violations, failure to yield, distracted driving, and illegal parking.

Additionally, auxiliary officers will be dispatched to provide New Yorkers with "safer bicycle, vehicle and pedestrian tips to reduce injuries and fatalities." After 20-year-old Robyn Hightman was killed by a hit-and-run truck driver last week, Officer Carlos Negron offered the following tip: "Maybe if she had been on the bike lane, maybe she'd still be alive."

Per the memo, traffic enforcement agents will also begin enforcing parking and moving violations. While transit advocates have long called for the civilian positions to be given the power to cite drivers, the news comes with a caveat: it will begin on July 8th and last only two weeks.

"You do not need armed police officers to enforce these types of moving violations," Marco Conner of Transportation Alternatives told Gothamist. "I hope very much they have a plan beyond this, that this is just a quick draft." 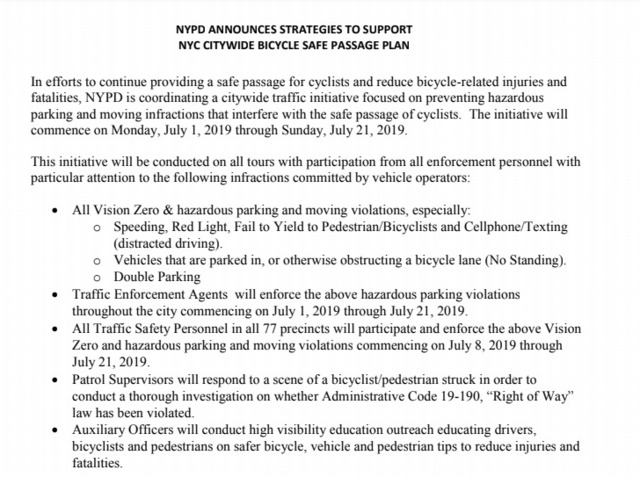 As promised, cops will also be tasked with issuing summonses to drivers obstructing bike lanes. While rarely enforced, blocking the bike lane is illegal and subject to a fine in New York. De Blasio has previously said the infraction is permissible in certain circumstances.

Perhaps most notably, the memo instructs patrol supervisors to respond to the scene whenever a cyclist or pedestrian is struck by a driver to conduct an investigation into whether the Right of Way law—a civil infraction—has been violated.

But Steve Vaccaro, an attorney who often represents cyclists, says that police fail to show up for well over half of Right Of Way law hearings, meaning even drivers who receive a summonses for violating the law don't usually face consequences.

"The obvious, glaring problem is that the NYPD has absolutely no commitment to seeing through the charges as written," Vaccaro told Gothamist on Tuesday. "They're completely oblivious to the gaping hole where more than half of the charges have fallen."

More ambitious proposals to improve cyclist safety—including existing legislation in the City Council to target repeat reckless drivers and dramatically speed up the building of protected bike lanes in city streets—do not currently have the support of de Blasio. A spokesperson for the Mayor's Office told Gothamist he is still reviewing the legislation.

In a statement, NYPD Commissioner James O’Neill vowed that the department would "work with all of our city partners to implement a comprehensive plan to reduce and ultimately eliminate bicycle fatalities. The NYPD vigorously supports Vision Zero, and enthusiastically promotes safety for everyone on our city’s streets."

The initiative technically began on Monday. We'll check back tomorrow to see if anything's changed.

Hey @NYCMayor is this the same NYPD you want to enforce protected bike lanes? pic.twitter.com/hCyelUMeED

#bikenyc
#mayor de blasio
#nypd
#vision zero
#we the commuters
#original
Do you know the scoop? Comment below or Send us a Tip