Last night in a brightly lit room at Staten Island’s Borough Hall, half a mile from the site of Eric Garner's death, the city agency responsible for investigating and prosecuting police misconduct sat and again mused on its own beleaguered existence. "Broken is too strong a word, but it's pretty close," chair Richard Emery said of the Civilian Complaint Review Board's attempts to hold the NYPD accountable.

The CCRB's monthly public meetings are usually held on weekday mornings in a nondescript building near the World Trade Center. That last night's meeting was the first in over a decade to occur at night, when most people don't have to miss work to attend, speaks volumes about the agency's posture towards the people it is supposed to serve.

In addition to debating how to best handle a backlogged docket of over 2,400 open cases and the knowledge that their recommendations are often ignored by police leadership—including Bill Bratton—Emery gave the audience an update on the CCRB's analysis of the more than 1,000 chokehold complaints it has received since 2009.

The forthcoming report will also identify a "lack of uniformity in the way that allegations were categorized," Emery admitted. "The audit is revealing troubling information," he concluded, adding that the report will be finished "in the coming weeks."

The report's analysis will be used by the agency to determine if a chokehold complaint might be predictive of future misconduct. Certain "problem-prone officers" might be identified, but Emery did not mention if such officers might receive sterner punishment recommendations or swifter investigations from the agency.

"The coroner already said it was ruled as a homicide," Young said. "Why hasn't he been indicted yet? To me it doesn't make any sense. I don't know if a chokehold is illegal or not, but the truth is he's dead. He's a man who's got kids. That was my friend. You don't kill a person over selling loosies."

Standing outside Borough Hall, Young said the officer's fate is "all in The Man's hands. And I don't mean God. It's the police, it's all in their hands."

In a larger sense, Emery acknowledged this as well.

"The absolute reality is the police commissioner has the ultimate responsibility and accountability for discipline," Emery said last night. "We have to mesh with that process in a way that serves effective to get public trust over the debate." 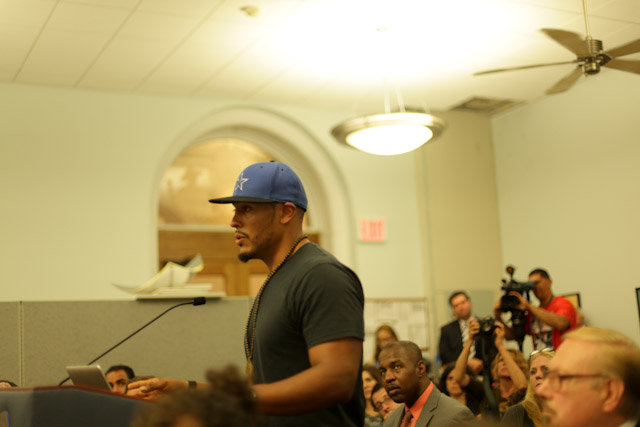 Public trust in the CCRB is in short supply.

"There is not enough independence here," said 32-year-old East Harlem resident Josmar Trujilo, during the public comment period. "I don't have faith as a public member...we still don't have faith in you."

"There's no urgency coming from this meeting," he added. "If you don't change your mentality, nothing is going to change."

Hopes of expediting the handling of civilians' complaints, which can take a year or longer, has been placed in "mediations"—confidential discussions between complainants and cops overseen by a moderator independent from the CCRB. Emery has expressed his desire to expand mediations in the past, and repeated that desire last night. "Mediation, as far as I'm concerned, is one of the major changes that can move this agency forward in creating a sense of trust and effectiveness throughout the city," he said.

Board member Tosano Simonetti echoed Emery's sentiment. "There are very few cases that should not go to mediation. Almost every case that comes in is mediable."

"It's not acceptable to take the position that what the agency's about is mediating cases. Cops will love that. Mediation is the best thing in the world for them," Dunn countered at the meeting. "They come in, they sit down, they have a meeting, they go home. There's no discipline, there's nothing."

Dunn also hammered the agency for being so mired in pointless bureaucracy as to be ineffective: "There is no reason why the complaints you investigate cannot be completed within three months. There needs to be a culture change." 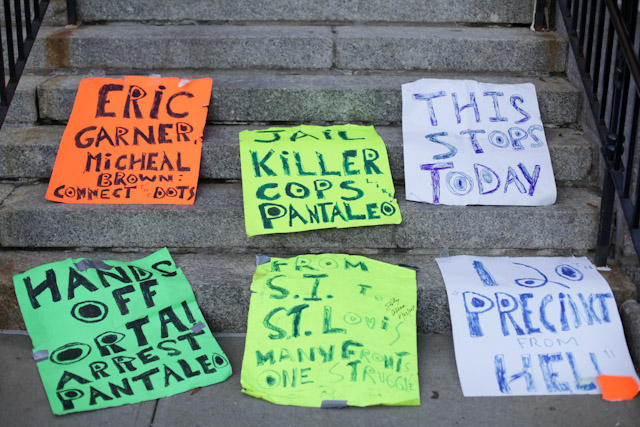 Outside the steps of Staten Island Borough Hall (Scott Heins/Gothamist)

As the meeting came to a close Emery mused again at length on the impossible position that the CCRB inhabits. "I’m still optimistic that putting my money where my mouth is…has the potential to turn around an agency that hasn’t had any public support or public confidence, with good reason in my view, into one that does. All I can do is try and increase the integrity of our investigations and the integrity of our results."

The meeting's final public speaker, Doug Brinson of Staten Island, stepped to the podium and reminded the board of Garner's killer. "He murdered my friend, and he's still working…When does it stop? You all gotta do a better job."