A kitten hitched a ride in an SUV from Brooklyn all the way to Harlem, but needed a hand—actually, many, many hands—to get out of the vehicle.

The 32nd Precinct Tweeted photographs of the mission on Tuesday: "#NYPD rescued this #kitten trapped in the undercarriage of this vehicle. Not a good place for a #catnap, especially when we are experiencing #CodeBlue. With the help of @NYPDSchools, @NYPDSpecialops & 3️⃣2️⃣Pct Patrol this kitten 🐱 is safe in a #Harlem #animalrescue #shelter."

The Post reports that the driver noticed a cat while driving on the Jackie Robinson Parkway in Brooklyn: "He stopped to avoid running the animal over — but when he looked around, she was nowhere to be found. The driver continued his trip to West 135th Street and 7th Avenue in Harlem — about 18 miles away — completely unaware that the terrified kitten was clinging to the undercarriage of the vehicle the entire way." (Cats love car engines a lot.)

But when he got out, the kitten was meowing so he flagged police officers for help. As you can see from the photograph above, seven officers were involved in this furmidable endeavor. 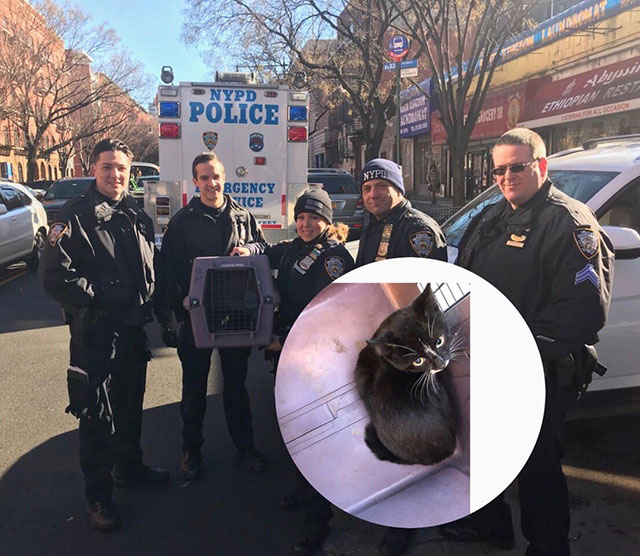 The female kitten is named Chance, "after Sgt. Christopher Chance, one of the officers from the 32nd Precinct who helped free her," according to the Post. She is now at the ASPCA.