NYPD Officer On Trial For Eric Garner's Death Will Testify Via Secret Document, Won't Be Questioned

Five years after Eric Garner was killed during a violent arrest in Staten Island, on the sixth day of an NYPD disciplinary trial that has spread languorously over 24 days, New Yorkers learned that the NYPD officer charged with killing Garner with an illegal chokehold won’t have to say anything publicly about his conduct, and won’t have to answer any questions either.

Deputy Commissioner Rosemarie Maldonado, who is acting as judge in Officer Daniel Pantaleo’s disciplinary proceedings, ruled today that Pantaleo will be allowed to submit a transcript from a 2014 Internal Affairs Bureau [IAB] interview, in lieu of taking the stand. The transcript, called a GO-15, was prepared during the Internal Affairs Bureau investigation of Garner’s killing. Though the IAB staff who conducted that investigation recommended charges be brought against Pantaleo, for reasons that remain unclear, the NYPD opted not to do so. Instead, the charges Pantaleo is currently facing were brought by the Civilian Complaint Review Board.

The consequences of Maldonado’s decision to accept the written statement mean that Pantaleo will have a chance to put his version of events before the judge without having to answer any questions from CCRB prosecutors in a cross-examination. And because of the secrecy surrounding Pantaleo’s disciplinary records, the contents of the 75-page GO-15 won’t be available to the public, either.

Stu London, Pantaleo’s lawyer, told Maldonado that he couldn’t let his client testify because it might expose him to a federal criminal investigation. The U.S. Justice Department did open an investigation into Garner’s death and convened a grand jury, but under the Obama administration the investigation stalled, as DOJ’s Civil Rights Division and prosecutors in the Eastern District of New York, which covers Staten Island, reportedly disagreed about whether to bring charges. Many observers believe the Trump administration is unlikely to prosecute Pantaleo, who is still employed by the NYPD. Federal prosecutors have until July 18th to bring charges.

Pantaleo’s lawyers called two witnesses Wednesday before resting their case. The first was Russell Jung, a former NYPD Sergeant who instructed Pantaleo in use of force at the Police Academy. Jung told the court that Pantaleo’s grip on Garner did not actually constitute a chokehold, which is expressly banned by the NYPD, but was instead a modified “seat-belt hold.”

The seat-belt hold involves an officer passing one arm under a subject’s armpit, bringing the other arm over the subject’s shoulder and linking the arms as the officer attempts to tip the subject onto the ground. It wasn’t taught when Pantaleo went through the academy, but was a recognized technique by the time of Pantaleo’s encounter with Garner, Jung testified.

Jung is now the CEO of a company called Ares Tactics, according to the company’s website (slogan: “Securing life and liberty by demystifying fear and violence”). The company provides training in self-defense, as well as in such topics as “Finding Your Inner Warrior.” Judge Maldonado repeatedly chastised Jung for being argumentative with the CCRB lawyer cross-examining him and failing to answer their questions.

Throughout his testimony—which included getting up from the stand to demonstrate a variety of combat techniques on a volunteer—Jung stressed that street arrests are dynamic, fluid situations, and that efforts to measure them against standards found in the NYPD patrol guide or police academy training materials are unreasonable. “This is not the gym floor,” he said, of real-world police actions.

Asked whether it was proper for police officers to use physical techniques they haven’t been trained in, Jung was frank: “There’s a million maneuvers we do in the street that we’re not trained to do,” he said. “We’re not trained to kick people in the shins.” The comment provoked an outcry from Garner’s family and their supporters in the gallery, which led to Judge Maldonado pounding her gavel and threatening to clear the courtroom entirely. 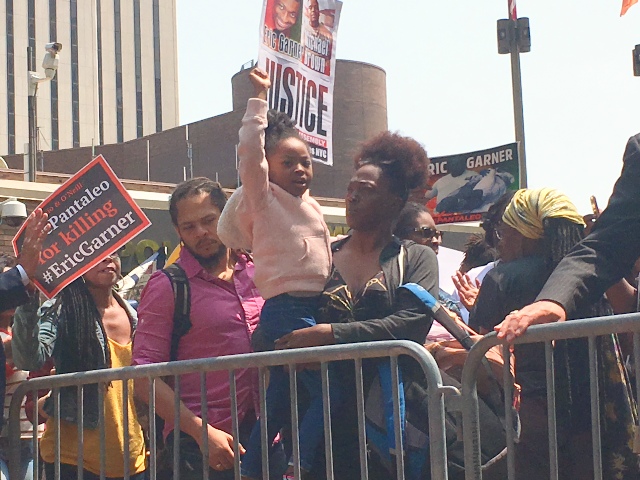 The other witness called on Wednesday was Michael Graham, the Chief Medical Examiner for the City of Saint Louis. Graham didn’t conduct Garner’s autopsy, but Pantaleo’s team paid $500 an hour for him to review the New York medical examiner’s autopsy report. That report concluded that Garner’s death was a homicide, and that his death was caused when a choke-hold restricted Garner’s breathing and triggered an asthma attack.

But Graham disagreed, testifying that compression of the neck was not the cause of Garner’s death, and that his repeated cries of “I can’t breathe” were not indicative of an asthma attack, either. “It just doesn’t look like that to me,” Graham said. Rather, Garner died as a result of his heart disease, he testified, “exacerbated by his interaction with law enforcement.”

“He probably felt that he couldn't breathe, but the fact of the matter is he could breathe,” Graham said. “Breathing is just moving air in and out. He's talking, he could move air. But with a lot of conditions you feel like you can't breathe, and that's probably what he's complaining about.” It’s possible the sensation Garner was feeling was actually brought on by something like heart failure, Graham said. “Just because he's complaining of shortness of breath doesn't mean it's because of anything that's happening in his neck.”

After the day’s proceedings, London summed up how Graham’s analysis supports Pantaleo’s explanation for Garner’s death: “He was emotional, he was upset, and that’s why he died,” London said.

The trial will resume Thursday morning. CCRB prosecutors may call a rebuttal witness to challenge Graham’s testimony, and then both sides will deliver their closing arguments. At some point thereafter, Maldonado will make a secret discipline recommendation to NYPD Commissioner James O’Neill, who will then make his own decision, unbound by Maldonado’s recommendation. O’Neill will not publicly announce his decision either.

Speaking outside One Police Plaza after Wednesday’s proceedings, Gwen Carr, Eric Garner’s mother, promised that she’s not finished seeking justice for her son. “Tomorrow, the trial might be over, but we’re not going to be over,” she said. “We’re going to let them know that they’re not going to sweep this under the rug. We are going to get justice. One way or the other, we are going to demand justice.”

#CCRB
#chokehold
#daniel pantaleo
#eric garner
#nypd
#police misconduct
#original
Do you know the scoop? Comment below or Send us a Tip