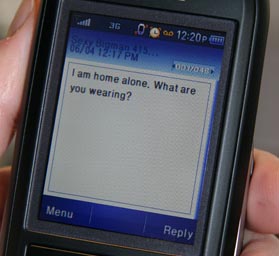 Hey kids, you can forget all about that square old NYPD that used to bodyslam cyclists and racially profile. New York City’s now got a hip and stylish police department, with a commissioner who doesn’t need a warrant to kill roaches and a brand new text messaging tips system. OMFG LMFAO @ u 4 calling 911.

Deputy Commissioner Paul Browne tells the Sun that the text-messaging initiative is part of the NYPD’s attempt to tap into “the culture of texting with teenagers and younger people. They're opting to text each other, so we're taking advantage of that." The system is intended to compliment the department’s 1-800-577-TIPS line. Now people who want to report a crime can “initiate a conversation” with detectives in the Crime Stoppers bureau by sending a text message to 274637, or the word “crimes,” on a cellphone.

To protect their identities, tipsters are asked to begin the message with tip577; they’ll then get a response from the police assigning a code name. And no, you can't choose your own code name, because that would lead to mass confusion with everyone picking Mr. Black. But when the NYPD starts accepting videos of crimes maybe then they'll let you choose your NYPDTube handle.

#nypd
#text message
#tip
Do you know the scoop? Comment below or Send us a Tip