Yesterday afternoon, Pix11 breathlessly reported a "credible" threat of a terrorist attack on New York City, citing anonymous law enforcement sources. The station said that Police Commissioner Bill Bratton had held an emergency meeting with top police commanders to discuss the supposed threat, and a memo went out to NYPD officers reminding them to stay vigilant and up to speed on the department's protocol for responding to an "active shooter." The memo notes that attackers using small arms and suicide vests can strike "with no warning." Minutes later, the NYPD denied the existence of a threat to a WNBC reporter, and soon thereafter the department sent out an unusual press advisory calling the Pix11 story "factually inaccurate," and enclosing a copy of the memo.

Yes, the report comes a week after a terror threat hoax shut down the Los Angeles school district and didn't faze Bratton, and 21 days after a reportedly jihadist couple massacred 14 people at a county worker holiday party in San Bernardino, California. The report also comes in the middle of a slow news week, at a time when many journalists, government spokespeople, and other potential sources who are part of the news making ecosystem are traveling, at home with their families, or otherwise on vacation. Is New York more or less at risk of a terrorist attack now than at any point since 2001? How are we to know now that the Department of Homeland Security has gotten rid of its handy color-coding system?

Whatever the nature of Pix11's sourcing on this particular story, the news media seldom has any concrete information about the level of threat we face—after all, an unstated threat is by its nature the absence of action. How can we prove a negative? And the NYPD, despite expending tremendous resources spying on Muslims in New York and around the country, has so far produced little useful intelligence, consistently overstates its role in preventing terror plots, and failed to stop the Times Square bombings that would have been devastating had the bomb-makers been more competent.

Yet, despite the severe dearth of information about terrorism, chatter about it has come to dominate news, particularly on cable, but also generally in New York, where we obviously have a particular memory of what it's like to be victimized. And so we get statements like this one from the NYPD's Deputy Commissioner of Public Information, Stephen Davis:

New York remains a top target for terrorists. Working with the FBI, we scan the threat environment on a daily basis. We evaluate each threat individually. There is no threat that we can deem credible at this time. [...] Since the Paris and San Bernardino attacks we have increased patrols and other counterterrorism resources out of an abundance of caution. The NYPD will continue working with the FBI, the Joint Terrorism Task Force, and the entire intelligence community to protect New Yorkers. 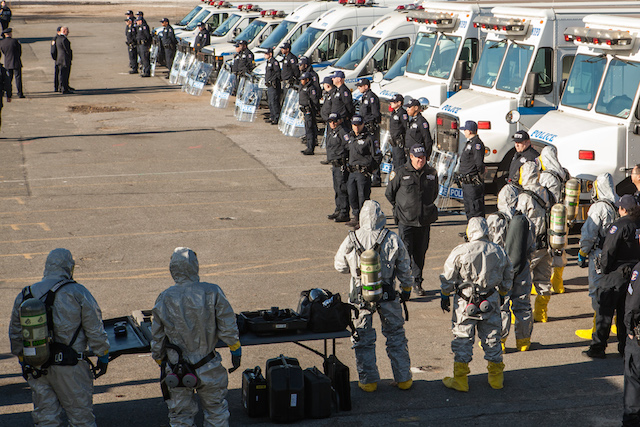 As NPR's Hidden Brain reported yesterday, the San Bernardino attack, unlike the many mass shootings immediately before it, has taken terror fears to heights unseen since September 11th—people surveyed in a Harvard University study think that that there's a 30 percent likelihood they'll personally be victims of a terror attack in the next 12 months. The study showed further that Americans' emotional response to imagery like ISIS propaganda videos makes us less able to think in a complex way.

Thankfully, media personalities like WCBS 880's Debbie Rodriguez are helping us keep this all in perspective. Here she is talking to Mayor de Blasio, in a transcript provided by the Mayor's Office:

RODRIGUEZ: Mayor de Blasio, today and tomorrow are huge travel days, because of Christmas coming up on Friday. A lot of people are going to the airports, and they’re worried about security. I’m putting my teenage daughter on an airplane Monday, and - and we’re fearful. What’s being done in terms of security, to make sure that everyone’s safe?

MAYOR: Well, there’s extraordinary efforts - and you know, in the city, we’re vigilant all the time. NYPD is doing an extraordinary job. And, you know, there were concerns after the attack in Paris, for example, and San Bernardino. A lot was done to show that we had very, very strong response out on the streets. We have our new anti-terror unit, our Critical Response Command - 500 plus officer that we included in this budget last June, specially trained to prevent terrorism and to deal with anything that might happen - a more heavily armed, better trained, dedicated force. But look - in terms of what we’ve seen since those attacks elsewhere, we had a lot of reinforcement around the Thanksgiving Day Parade - it went very, very well. We had a lot of presence around the Rockefeller Center tree lighting - that went very smoothly. There will be plenty of protection at the airports, plenty of extra officers out at any major public events - obviously, looking forward to New Year’s Eve as another example. There will be plenty of presence, including some very well armed officers. So I would say everyone should go about their business. I - I’ve said this a lot of times - we’re not going to let anyone intimidate us. We’re not going to have any of these very vague threats change our way of life. There’s lots of great security presence, and a lot of people watching out for your daughter and everyone else.

For more perspective: from 2001 to 2013, 406,496 were killed by gunfire, self-inflicted, accidental, or malicious. In the same period, including the 2,990 killed on September 11th, and including Americans killed overseas, 3,380 died from acts deemed terrorism by the U.S. State Department and CNN. Of course, the U.S. government has declined to call the fatal shooting of three people at a Colorado Planned Parenthood clinic and the killing of nine in a centuries-old black church in South Carolina terrorism, and since the War on Terror began, the word has been twisted to the point of becoming meaningless.

Also, for those keeping score for political purposes, mass shootings, whether they're considered terrorism or not, are overwhelmingly committed by men, and break down about proportionally by race and ethnicity, though guys of Asian decent are over-represented among mass shooters. A New America analysis has right-wing yahoos beating out Muslim yahoos 48 to 45 in a grisly "extremist attack" body count contest since 2001. Heart disease is still the leading killer of Americans, claiming 611,105 lives in 2013.

In New York City, 238 people have 238 people have died in car crashes so far this year, but pedestrian fatalities were at a historic low last year. Recorded crimes are at historic lows, and murders are up slightly, at 339 compared to the 333 recorded in 2014, but still near the all-time low since the city has kept records.

So are we safe? All we have is numbers, speculation, and the dubious buzzing of unnamed government sources. An employee at a Home Depot in Chelsea was arrested four days ago for allegedly threatening to shoot up his workplace with an AK-47. Police charged him with making a terrorist threat. Was he a lone wolf? Will the NYPD add this to its list of terror plots thwarted?

It's hard to fit all that into a headline. But hey, on cable, they've got 24 hours to fill.

#climate change
#heart disease
#nypd
#poverty
#safety
#security theater
#street crime
#talking heads
#terrorism
#traffic deaths
Do you know the scoop? Comment below or Send us a Tip
A new Gothamist is coming! We’ve moved comments over to our beta site. Click here to join the conversation and get a preview of our new website.