NYPD Much Too Honest To Need An Inspector General, Bloomberg Declares

Around 9:30 last night we were listening to a panel of experts discuss the proliferation and future of the police state in New York City (just another relaxing Tuesday evening) when mayoral candidate and City Comptroller John Liu strolled in unannounced and fresh from his Daily News scrap with Bill Thompson to take a few questions from members of the audience. Liu assured the crowd that he would not only dismiss Police Commissioner Ray Kelly, but indicated that he would clean house at the upper-echelons of the NYPD.

The questioner began speaking by saying, "How fast would you fire—" before doubling back and asking the slightly less aggressive, "Would you keep Ray Kelly?"

The short answer is no. But let me also say, in fairness to Ray Kelly, this question gets asked a lot; I don't think anybody has asked him if he wants to continue as police commissioner. It's been 12 pretty grueling years and you know, I would not continue him nor would I continue anyone else from the Bloomberg administration for that matter.

Is it really that simple? And do the current higher-ups truly have that much power? We asked Leonard Levitt, who spoke on the panel and was the evening's keynote speaker, if what Liu was suggesting was true or feasible.

"What Liu is saying about branches of chiefs sounds good but under this administration, as opposed to the previous three I have covered—Kerik, Safir and Bratton—these chiefs mean nothing," Levitt said. "They have no power."

Indeed, one of the first comments Levitt made at the outset of the event—which was sponsored by the Jim Owles Liberal Democratic Club—was that Bloomberg delegated "complete" authority of the NYPD to his commissioner. "The power is all concentrated in the hands of one man."

In an email, Levitt continues:

Both Bratton and [Howard] Safir, and even Kerik, gave their chiefs lots of latitude. Bratton in particular gave plenty of power to John Timoney, his Chief of Department who later became First Deputy, and to Louis Anemone, who he appointed Chief of Patrol and later Chief of Department. Timoney went on to head police departments in Philadelphia and Miami as did a number of other high-ranking chiefs Bratton appointed. Ditto Safir, who appointed Joe Dunne Chief of Department. Dunne now heads the Port Authority Police.

Under Kelly, there is no chief who has any power—not even [Chief of Department Joseph] Esposito—and none has gone on to head any other major department.

Which brings us to Mayor Bloomberg's opposition to a promising City Council bill that would create an Inspector General to oversee the NYPD. 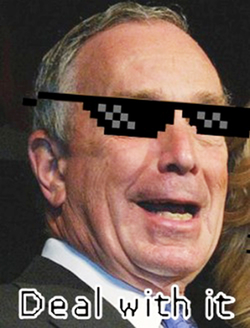 In a statement, the mayor (not his attorney) first recounts a brief history of policing over the last 25 years ("Mayor Dinkins and Council Speaker Vallone fought for and won funding to hire thousands of new police officers…and when Rudy Giuliani became mayor and deployed CompStat and adopted a Broken Windows strategy, crime began to fall dramatically") before characterizing the appointment of an IG as "tampering with…success." According to Bloomberg:

The purpose of this bill, for those of you that don’t know, is not to curtail corruption—because so little exists. Five district attorneys and two U.S. Attorneys oversee the NYPD, as does the Civilian Complaint Review Board and the Commission to Combat Police Corruption.

That would be the same CCRB that Kelly previously fought against (before finally relenting last year to granting the agency a modicum of power that he may continue to override) and the same Commission to Combat Police Corruption [CCCP] who saw its head resign in 2005 after he was prevented from investigating charges that police officers were being pressured to fudge crime statistics.

The current head of the CCPC, Michael Armstrong, believes that the best tool for stopping corruption in the NYPD is...Ray Kelly. Bloomberg continues:

That’s not an Inspector General; that’s a policy supervisor, and I don’t think any rational person would say we need two competing police commissioners. There would be questions in the ranks of police officers about who is really in charge—and whose policies they should follow. That kind of breakdown in the chain of command would be disastrous for public safety. [Emphasis ours]

If the Council passes it—and I urge the members to oppose it—I will veto it. We have come too far to forget the lessons we’ve learned. And those who taking our record low levels of crime for granted are making a terrible and tragic and dangerous mistake.

During the discussion last night, Levitt noted that the NYPD had an IG of sorts—the state special prosecutor's office, an office once held by Brooklyn DA Charles Hynes. A report issued by NYPD Commissioner Kelly in 1992 criticizing the department's response to a raft of unchecked police misconduct singled out the office for having a "narrow perspective" when investigating claims of corruption.