NYPD May Be Forced To Investigate Serious Car-On-Bike Crashes

Drivers who maim or kill cyclists in NYC rarely face criminal charges, and at an eye-opening City Council hearing last month, we learned that this is partly due to the NYPD rules governing crash investigations. The NYPD's understaffed Accident Investigation Squad [AIS] only investigates crashes in which there is a fatality (and even when they do investigate, it's still rare that criminality is suspected on behalf of the driver). A new proposal from City Councilmember Stephen Levin would require the NYPD to investigate when there is serious injury, not just when someone is killed or likely to die.

In a letter to NYPD Commissioner Ray Kelly, Levin expressed dismay that 99% of all accidents that resulted in serious injury in 2011 were never investigated. "While this is shocking in and of itself, it is particularly disturbing in that the NYPD's policy concerning AIS investigations does not appear to be in accordance with the specific law that elucidates how these types of investigations are to be triggered... The many thousands of New Yorkers who have suffered serious injuries as a result of motor vehicle accidents deserve to know why the NYPD does not investigate those accidents in accordance with Article 22, Section 603-A of the New York Vehicle and Traffic Rules." 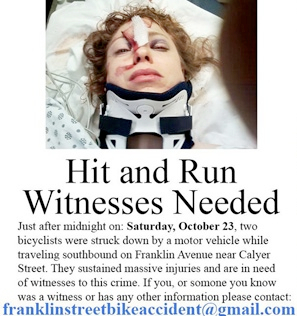 (Cyclist Michelle Matson after she was nearly killed by a hit-and-run driver in Greenpoint. No charges were ever filed.)

You can read Levin's full letter to Kelly below. The state law he's referring to requires a thorough investigation in the event of "serious physical injury," including "serious protracted disfigurement, protracted impairment of health or protracted loss or impairment of the function of any bodily organ." Levin's calling for new legislation amending the Patrolman’s Handbook so that thorough investigations are conducted when there's a serious injury, in accordance with, you know, the law. RADICAL!

Levin is also proposing a second bill intended to "greatly increase and decentralize the pool of trained AIS officers so that more accidents can be investigated in accordance with the law." Currently the AIS only has 19 detectives, three sergeants, and one lieutenant, but the division is responsible for investigating fatal accidents for the entire city. Levin wants all NYPD precincts to have five officers trained in preliminary AIS training, and these officers should be qualified to issue summonses for failure to exercise due care. His legislation, first reported by The Brooklyn Paper, would also require one such trained officer to be on call at all times.

"Something is horribly amiss," Levin tells us. "We heard numerous stories at that hearing where there should have clearly been a thorough investigation. My staff looked into the traffic and safety rules, and it turns out the patrolmen's handbook is simply out of compliance with state law. There have been real life-changing effects to these crashes, and in some cases, potentially criminal aspects to the accident. And they are going uninvestigated, and unprosecuted.

#accident investigation squad
#AIS
#cyclists
#nypd
Do you know the scoop? Comment below or Send us a Tip