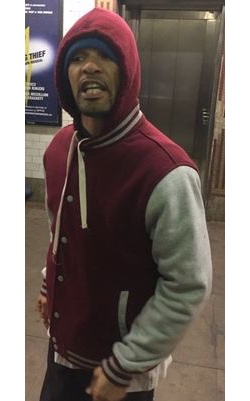 A woman was attacked on a 2 train in Brooklyn this week, according to police, who are hoping the public can help identify the suspect.

The incident took place on a northbound 2 train on Friday, March 31, at 8:30 a.m. The 30-year-old woman was on the train when, the NYPD says, an unidentified man slapped her on the left side of her face. According to the Post, the woman been talking with friends when the man suddenly hit her.

When the train arrived at Borough Hall, the suspect allegedly fled. The victim was treated by EMS at the station.

The authorities released an image of the suspect—apparently taken by a Good Samaritan—and describe as him as about 35 years old, 5'11" and 160 pounds. He was last seen wearing a blue skull cap, red and white coat, and black jeans.

#2 train
#assault
#brooklyn
#subway
Do you know the scoop? Comment below or Send us a Tip